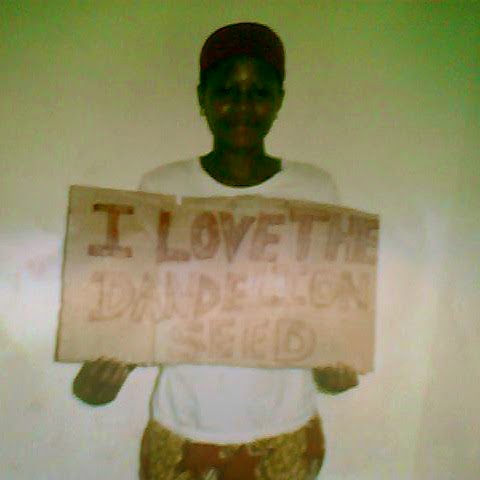 On this, their new self-titled long player, Iceland’s best hidden psychedelic warlocks The Dandelion Seeds emerge as northern lights in the new wave of Northern Psychedelia that is currently floating out lysergically from such upper hemispheric climes as Ireland (United Bible Studies, Raising Holy Sparks, The Driftwood Manor), Sweden (Goat and Dungen), Norway (Sleepyard), England (The Temples) and Denmark (Motorpsycho). Following several other low key but hugely promising releases (2011’s ‘Pink Street Sessions’ and ‘Good Times With The Dandelion Seeds’) this full length trip into the outer reaches of sonic space incorporates and distils the rampant inventiveness and general ‘out there’ qualities of the Seeds into an extremely powerful and thrilling dive down the rabbit hole.
‘Al Azif’ is a full throttle psychedelic monster, vocal harmonies drifting hazily over driven fuzz guitar, backwards tapes and Floyd-esque organ into an epic interstellar overdrive of a jam. Tight yet free to roam and experiment, the band achieve full velocity in a Goat style raga freak out that truly +has to be heard. ‘Dual Operation’ with its Byrds minor key jangle, freeform soloing and contagious melody (these chaps seem incapable of writing something that doesn’t then stick like Technicolor glue in your head) is a long lost summer of love classic. Likewise, ‘Crazy Sun’s late summer shimmer is a gorgeous and nostalgic perfect piece of 60’s styled pop; a proper golden nugget. Reminiscent at times of mid period Julian Cope with chiming harpsichord styled guitars and flanged soaring choruses there is much here that will be held dear by Active Listener readers. ‘Rasa Shastra’s distorted organ and eerie guitar adds a roughhewn edge to the descending, sinister Syd Barret melody; indeed The Dandelion Seeds remind us of Iceland’s eclectic , playful and colourful musical linage (such as The Sugarcubes) that has been somewhat overshadowed of late by the post rock of fellow countrymen Sigur Ros. ‘Soul Thing’ wears its 1960s London heart on its sleeve, the dominant piano creating an imaginary soundtrack to an unmade Lindsay Anderson film. This listener can hear pleasing washes of Nirvana (the original lot rather than Kurt’s), Her Satanic Majesties Rolling Stones and Piper-era Floyd’s bold experimentation and off kilter guitar work, perhaps with a touch of the C86 indie scene sprinkled on top.
‘Took Your Life Babe’s air raid siren guitar and reverbed vocals are genuinely exhilarating, feedback wailing around the verses; garage meets space rock in a meltdown of fuzz and harmony. ‘The Waiting Game’ is a sitar spangled shooting star of a song; there are more melodic ideas in one Dandelion Seeds song than in most bands’ careers. Paisley guitars chime and peal propelled by a solid backbeat with thrusters on full speed. The Stone Roses write songs like this only in their dreams. ‘Örlygstaðabardagi’ finishes the album with the whirling analogue winds descending into an all-out volcanic eruption of guitar noise and cosmic bass. It’s a symbol of the sheer creativeness and lack of conformity that The Dandelion Seeds have in spades; they are truly on their own trajectory; you are welcome to come along for the trip (man) but they’re firmly at the controls.
Psychedelia aficionados will want to hear this; indeed anyone with a love for classic 60s pop and space rock will want to strap themselves in ready for launch. The Dandelion Seeds are going places.