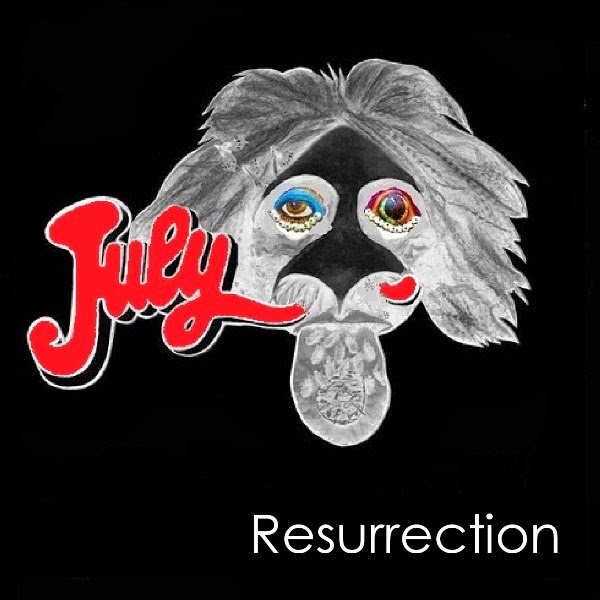 I'm sure that there will be very few of you who are not familiar with July's self titled 1968 psych-pop classic. The much compiled "Dandelion Seeds" is only the tip of that particular iceberg and the album has earned it's place alongside the likes of The Blossom Toes "We Are Ever so Clean" and Kaleidoscope's "Tangerine Dream" as one of the very best examples of U.K psych-pop to not come from a name that the average joe in the street would recognise.
What you may not have noticed however is that July have reformed and have a brand spanking new album available, recorded over 40 years after its predecessor and fittingly named "Resurrection".
Of course a lot has changed in 40 years, and apart from the swirling haze of the beginning of "Can I Go Back Again", it's very clear that Tom Newman, Peter Cook and co. have no intentions of laurel-resting or slavishly attempting to recreate their past triumphs. These guys have moved on musically and the listeners who are going to benefit most from it are those who are willing to move with them.
There are still plenty of psychedelic moments to be had, but there's a more progressive mindsight guiding them with some purely Floydian guitar leads butting heads pleasingly with material that is noticeably more informed by hard rock.
Looking forward rather than back, "Resurrection"s relationship to the original 1968 album reminds me a lot of that of another unexpected comeback - last year's new Fuchsia album. Much like that, "Resurrection" is a graceful and mature effort that may disappoint those looking for more of the same, but will reward those of a more flexible mindset.