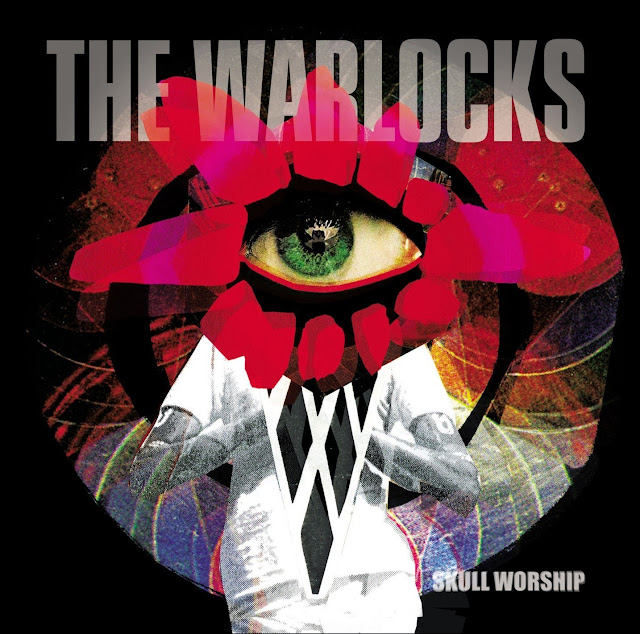 "Skull Worship" has been on my personal radar since seeing the band blow the lid off the Levitation Tent at Austin Psych Fest in April of last year. The opening track "Dead Generation" was one of the highlights of their set and I simply jumped at the chance to review this record.
The Warlocks have been one of the bands leading the neo-psych revolution since their self-titled first record in 2000. Despite an ever-changing lineup, chief Warlock Bobby Hecksher has maintained a constant upward path, with each release building on the strength of the previous and never slipping an inch. This consistency in quality despite such a chaotic inner circle is as much a testament to both Hecksher’s song craft as his gift for managing personnel and maintaining a consistent vision. And that vision is indeed a dark one.
Since the LSD drenched pop of "The Phoenix Album" of 2002, Hecksher and company has been following a more dangerous path, begun with the release of "Surgery" in 2005. The subsequent "Heavy Deavy Skull Lover" (2007) and "The Mirror Explodes" (2009) seem to have been leading up to the dark majesty of "Skull Worship". In this, the form seems to have finally been perfected.
"Skull Worship" is a mournful, droning epitaph of a record full of broken glass and broken hearts, the soundtrack for a land where the pale sun only rarely illuminates a slate colored sky. Multiple guitar tracks layer one upon the other, like oils in the portrait of a dying man. From the aforementioned "Dead Generation", the band moves from one dark dream to the next.
"Chameleon" comes on like a persistent memory of personal disaster, with it’s pounding toms and hornet-in-the-ear guitar. Organ and bass introduce "Endless Drops" and give way to huge walls of guitar. "Silver & Plastic" paces through with the help of acoustic guitar and viola. "He Looks Good in Space" utilizes mellotron and synths and serves as a perfect lead in to the guitar overdose of "You’ve Changed". "It’s a Hard Fall" follows with its refrain of “You’re sick, when I need you. You’re sick.” "Eyes Jam", the final song, is a backwards-masked drone reminiscent of Spacemen 3 by way of the Velvet Underground. It completes this dark journey, but somehow leaves one with the impression of the darkness retreating back into the void, or the feeling of having survived the dark subway journey and of climbing that long staircase once more into the light of day.
Throughout "Skull Worship", Hecksher’s frail vocal seems like at any moment it could break. Instead he perseveres, which is probably the message The Warlocks would wish to impart. We live in a world that is sometimes shrouded in darkness, but we somehow get through. Maybe the purpose of art is to give us an understanding, or a tincture of the void so that we might grow accustomed to it, and in so doing lose our fear.
The Warlocks dark vision is a glimpse into madness and despair, but one that leaves us somehow stronger for having taken the journey. Highest recommendation.

"Skull Worship" is available on vinyl, digital, or CD.