The Prisoner of Mars "You've Got a Friend in Satan" Review 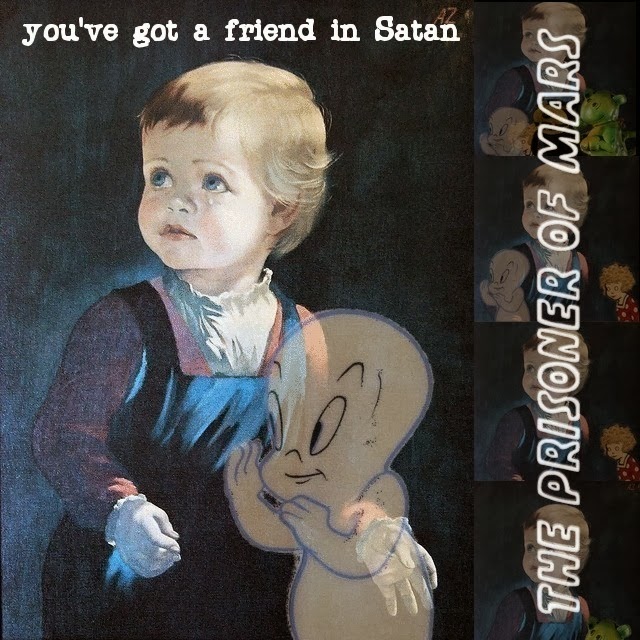 You've been harassed about The Prisoner of Mars in these pages before, and considering chief Mars man Bryan Shore's obsessive compulsion to release music at a speed that belies its quality, you're likely to again.
Previously a one man band sort of operation, Mr Shore has now acquired an actual band and his latest release with these other musos combines his winningly quirky lo-fi psychedelic pop charms, with a ramshackle 'friends knocking out a tune in a room' quality that initially sounds completely off the cuff, but draws further into focus with each listen.
It's a particularly appealing listen that after compulsive relistening is, I reckon the best set of songs this lot have bundled together so far under one umbrella.
The tuneful, lo-fi pop tunes of previous releases still constitute the root element of these songs, but the added band interplay gives the infectious "Leopard Skin Pillbox Hat" homage "Carry Bag Bag Bicycle Man" an added drive and choogle that you just can't get multitracking parts by yourself. Similarly, "Did You See Me/POMRAkestra" segueways from a moody, acoustic piece of indie psych smothered with lovely mellotron touches into a hypnotic space-rock jam that should feel interminable at over twelve minutes, but locks into such a solid groove that I'd be quite happy for it to double its length.
Best of all though is "Radio Dada" - a track that plays to all of Shore's strengths, with an infectious chorus backed by a naggingly familiar, descending arpeggio guitar figure straight out of the George Harrison rulebook, and an engaging vocal performance that will have fans of the Phoenix Foundation's Samuel Flynn Scott checking the credits for a non-existent guest appearance.
It's a grower not a shower for sure, but well worth the effort and a habit former for those willing to invest the time.
Available as a name your price download here: