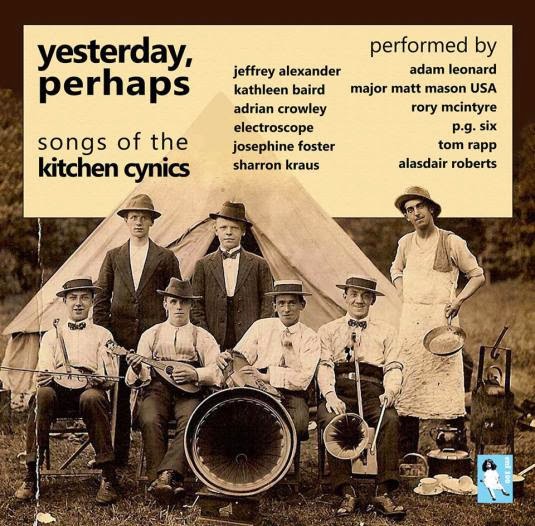 A true musician's musician, Aberdeen's Alan Davidson has been quietly accumulating an impressive back catalogue of CD-Rs on his own Les Enfants Du Paradiddle label, and for the 100th (!) release on the label (on vinyl this one) he's been given the tribute treatment by a fine selection of artists that will lead you to the conclusion that Mr Davidson is one of those rare artists whose fan to performer conversion rate rivals the likes of Big Star and the Velvet Underground.
Not that he sounds like either of course. The Kitchen Cynics material is folk music with a creepy disposition, with originals like the horrific "When Father Hanged The Children" (here covered by Sharron Kraus) giving even the most sinister of the original Childe Ballads a run for their money.
What makes these often bitter pills so easy to swallow is the easy grace and verve of Davidson's performances, a natural storyteller's delivery and lyrics that could function as well as poetry as they do as prose. Not to mention the supple guitar work.  Dylan Carlson of Earth once memorably described Davison as reminding him of "a meeting of Anne Briggs and Robert Fripp" - a description I have yet to hear either bettered or disproved.
A pretty hard ask then to get a disparate bunch of characters together and get them to do justice to songs so individualistic, but one accomplished with aplomb by almost all involved here.
It helps that this isn't really a cross genre exercise. These are all artists that fit snugly into the folk-psych genre - perhaps even more so than Davidson himself, with some lovely evocative soundscapes accompanying, but never obscuring the stories that serve as the centrepieces of these great songs.
Pearls Before Swine's Tom Rapp turns in a memorable version of "Richard in Bedlam" early on, only to be outdone on the very next track by Alasdair Roberts and friends' sinisterly percussive "The Horseman's Word". Impressively, the standard doesn't drop at any point thereafter with Adam Leonard transforming "The Place You Hid" into an unlikely anthem with (gadzooks!) commercial appeal.
Wonderful stuff, with just the right balance between well deserved reverence and experimentation.
And an ideal entry point to an essential catalogue that there's a very good chance you haven't investigated.

This special vinyl release is available directly from Alan by e-mailing kitchencynics@googlemail.com.
It comes with a CD-R of the album which also includes the original Kitchen Cynics recordings of each song.

If you'd like to hear more of the Kitchen Cynics music, the Active Listener label has just released "The Orra Loon", a collection of some of Alan's best music which can be streamed or downloaded here.

There are no online samples to listen to from "Yesterday, Perhaps" but you can listen to a Kitchen Cynics performance of "Richard in Bedlam" here: