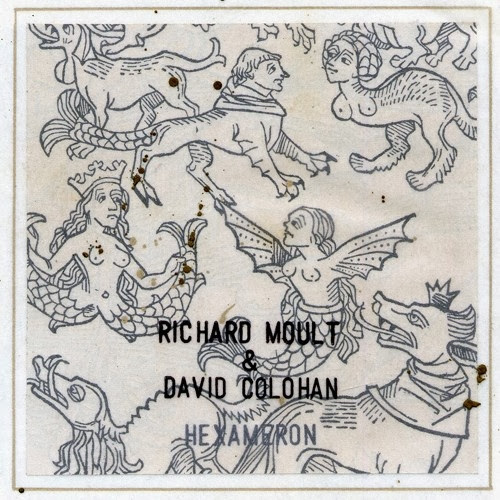 The latest release from the splendid Time Released Sound label features two students from Ireland’s premier wyrd folkers United Bible Studies who are also musical luminaries in their own right; Richard Moult (of Far Black Furlong, Orchestra Noir and composer of many fine recordings under his own name) and David Colohan (of Raising Holy Sparks and Agitated Radio Pilot). Hexameron is a beautiful and melancholic journey recorded by Moult in the early hours of darkness during gale force winds at his home on the Isle of Skye and later added to and embellished by Colohan in Ireland. Much like the circumstances of its recording, Hexameron is a dark, spacious twilight of an album with moments of quiet reflection occasionally punctuated by sudden and heart wrenching gales of noise.
Each piece is accorded a number rather than title, suggesting that the album is to be taken as a movement or as a set piece that builds and grows. Emerging from the twinkling, peaceful acoustic dusk of the first piece, Moult’s piano merges with Colohan’s distorted electric guitar on track two, elegantly evoking slivers of sadness and longing in a haze of fuzz and tremulous reverbed notes. The third piece is built upon Colohans’ acoustic fingerpicking, the sense of beauty and gentleness added to by Moult’s piano until huge sudden swathes of electric noise come crashing through like wind against the landscape to be joined by haunting keyboards before fading back to piano notes; the swell of the storm subsiding. Moults’ most recent album Aonaran (also featuring Colohan and highly recommended) evoked a sense of the Western Isles and the mountainous, wild terrain that Moult was writing in. Colohan’s Raising Holy Sparks also do a good line in painting a vivid picture of wide open horizons and desolate yet beautiful vistas; both artists do not disappoint with this joint outing. You can almost taste the darkness over the hills and water; the sense of quiet and loneliness inherent in these songs. Yet there is an extra element include this time around; a sense of the time of year (January) and small hours that Moult initially recorded in. This music exists at the liminal margins of both night and day, when one is fading into the other; the night sky is lightening yet is still dark. It is this texture and quality that affords such a melancholy and wonder to these tracks. Colohan’s guitar virtually yearns over Moult’s Popol Vuh-eque keyboards, the piano glistening like dawn over the water. Occasional discordant blasts of alto saxophone and trombone add to that 3am sense of disorientation.Track five adds tense John Cale style bass notes to the building and gathering maelstrom of guitar and piano, not unlike Nico’s classic ‘Evening of Light’ (itself reminiscent of a winter storm). Final piece, number six, appears to herald in the dawn, broken yet triumphant guitar proclaiming survival over echoing keyboards and piano.
The nearest comparison to this album is the artists’ own individual previous work and collaborations but at a push there are elements of Godspeed You Black Emperor’s most widescreen and atmospheric adventures as well as perhaps ‘Music for Films’-era Eno and again, Popol Vuh. However the music that these two criminally under sung artists make is truly theirs; it is in a world of its own.
Special mention must be made of the beautiful packaging that this album comes housed in; Time Released Sound are known for their releases being works of art in themselves (witness Plinth’s ‘Collected Machine Music’ which came as a music box with its very own individual song strip and covered in vintage photographs and ephemera). A surrealist collage made from original work by Gustave Dore and added to by Colin Herrick of the label it features waves, angels, woodland and machinery adorning the cover, suggesting an uneasy mix of nature, spirituality and the industrial world.  Indeed this album is spiritual; it evokes a sense of human frailty and search for meaning, and who hasn’t been in that space at 3am at some point? This standard edition is limited to only 200 copies; do not miss out.
The deluxe limited version package, in an edition of just 75 copies, is composed of original pages from a 90+ year old book on the work of the obscure 15th century printer and illustrator Anton Sorg. The collaged, inked and stamped envelope comes in a hand worked, outer translucent envelope with a selection of his medieval drawings, a banded CD sleeve made from a page of heraldic crests and a large double sided insert.
This is music for those dark, empty times of night when all you can hear is the wind and your own thoughts. A soundtrack to the storm.