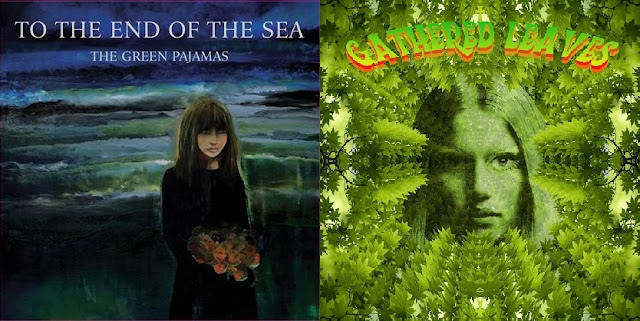 I'm getting too old to keep up with all of Sugarbush Records' wonderful output, but here are a couple of highlights from their last few months of releases,  lovingly pressed in small quantities on vinyl (350 and 200 copies respectively).

A new Green Pajamas album is always cause for celebration, and "To The End Of The Sea" may well be their best for a decade. CD and digital releases happened earlier on in the year, but Sugarbush have done us all a favour by putting it out on lovely blue vinyl (their third Green Pajamas vinyl release).

While recent albums have tried different things and had much to recommend them, "To The End Of The Sea" returns to the tried and true 'classic' Pajamas sound of the late nineties / early noughties with Jeff Kelly's best set of songs for a long time, albeit with a more knowingly psychedelic presentation, which is just fine with me.

"When Juliet Smiles" is another in a string of perfect, wistful psych-pop gems. This and "Ten Million Light Years Away" are the sorts of songs that have GP fans tearing out their hair and shaking their fists at the cruel hand of fate, and it's hard not to agree that this music should be heard by so many more than it is.

And while it's easy to cherrypick specific tracks for praise, for highlights are many, it's as a complete suite that this works best.

Get the vinyl here (digital and CD from the link below).

Also new, and fabulous, is "Gathering Leaves", a carefully curated compilation of material originally featured on Ptolemaic Terrascope's free CDs from the nineties and early noughties.

For those unfamiliar, Ptolemaic Terrascope was a long running psychedelic fanzine founded in the eighties by Phil McMullen and Bevis Frond's Nick Saloman, the approach of which was very similar to ours here at the Active Listener, but on a much more ambitious scale.

"Gathering Leaves" does a great job of illustrating just how diverse a genre psychedelia can be, embracing everything from folk (Sharron Kraus), psychedelic pop (The Dipsomaniacs & The Green Pajamas again), to more experimental fare like Saint Joan who's lengthy epic "December" is something of a highlight here - particularly as I'd never heard of her before.

And let's not forget that at the time, this was pure outsider music. Psychedelia was yet to be homogenised and reintroduced to the masses by the likes of Tame Impala. This acknowledgement that even in the (musically speaking) darkest times, adventurous and exciting music is being made, if you're willing to look hard enough for it, resonates deeply with me.

I'm amazed that there are copies of this left still - but apparently there are. You can get them here (all prices include international shipping). Get in quick!