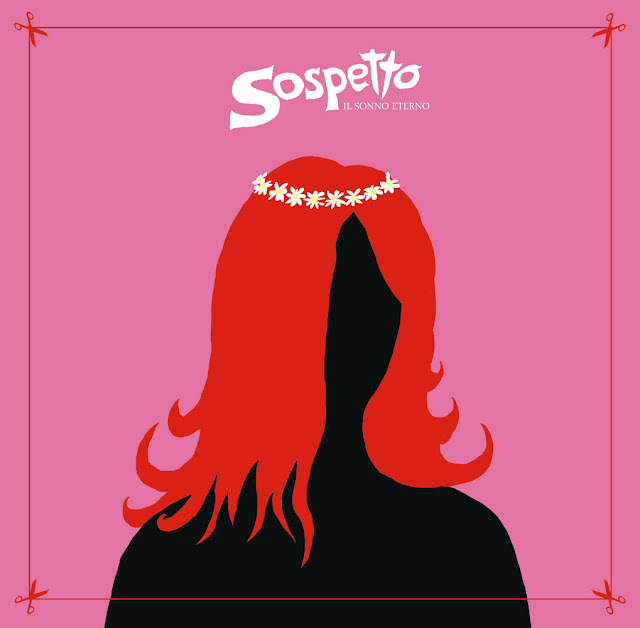 Not content to churn out the same album over and over again like some Italo worshippers, Germany's Sospetto have made another abrupt course change on their latest, Il Sonno Eterno.

2015's Quattro Specchi Opachi saw them expand their Goblinesque giallo palette to include sci-fi, eroticism and cop thrillers, albeit with a healthy dose of Giallo still. Il Sonno Eterno is a different kettle of fish entirely, soundtracking an existential drama in which Sospetto investigate the different levels of consciousness triggered by the insomnia of a young woman, portrayed by Christien Marks, whose haunting wordless vocals can't help but recall the work of Edda Dell'Orso.

Musically, this is a lush, often sensuous soundscape, betraying the influence of key works by Ennio Morricone and Piero Umiliani, without appearing overawed by the illustrious company it sets out to keep. Check out opener "Il Sonno Sano", a lovely, sighing exhalation of a thing with a flawlessly vintage sound that you'd swear was recorded at least 45 years ago, a running illusion that isn't shattered at any point throughout this album's playtime.

There are still moments of the unease and suspense that Sospetto have demonstrated their mastery of on previous releases. The mounting tension of "Disturbo Del Sonno" shows that they've lost none of their ability to keep us on the edge of our seats, but that's not their priority here. Generally this is a cosy, romantic, cinematic experience which sounds like big money and utter class. Witness the gorgeously swelling strings which usher in finale (and title track) "Il Sonno Eterno", recalling as it does the very best of Wally Stott's orchestrations on Scott Walker classics like "Montague Terrace in Blue".

Absolutely gorgeous and a must-hear record.