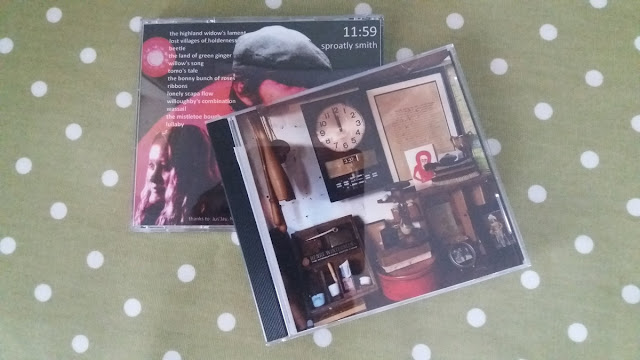 In anticipation of a brand new album from Sproatly Smith, Herefordshire’s finest acid folk exponents, comes a timely round up of some previously released material from compilations as well as some old classics and a couple of newbies. Many moons have passed since Sproatly’s last agricultural opus , 2014’s ‘Thomas Traherne’ although they have filled the intervening years with their essential Weirdshire compilation albums of local artists and their popular live festivals, featuring acts such In Gowan Ring and Trappist Afterland.

'The Highland Widow's Lament' (which may be familiar to you as the opening song in The Wicker Man) begins the album, a gentle drone and picked guitar framing a truly lovely vocal performance, xylophone chimes drifting overhead. Sproatly make this song their own and demonstrate their ability to inhabit traditional folk whilst also making it distinctly 'Sproatly'; indeed there is a pleasant, otherworldly edge that pervades. 'Lost Villages Of Holderness' (from the A Year In the Country compilation ‘The Quietened Village’) begins with sweeps of urgent harp and strings, birdsong and waves crashing underneath to conjure up a Powell and Pressburger style lament that could easily grace the soundtrack of their magical 'I Know Where I'm Going'. Cello, ripples of analogue keyboards and guitar frame Sarah Rarah and Kate Gathercole’s delicate harmonies as the song builds and layers to a heartbreakingly beautiful crescendo. 'Beetle' follows, a small slice of atmospheric wyrd folk that serves as a warm yet uncanny interlude before 'The Land of Green Ginger' enters with film samples and a circus organ, a twisted merry go round that both intoxicates and unnerves. Oscillating synths gather like flocks of birds as the song culminates, a mummers play in musical form.

Returning to The Wicker Man as source material, a spooked and haunted version of the alluring 'Willow's Song' adds a whistling theremin and the sound of creaking machinery to an already spectral interpretation. Sproatly do this with ease; on the surface things feel pleasant enough and yet...underneath there is a hint of rural menace and of something unsettling in the village. 'Tomo's Tale' finds echoed glockenspiel and vintage synths chiming and twisting around a truly gorgeous vocal line, a song that could perfectly have soundtracked the folk horror sci-fi of The Quatermass Conclusion. Next, electronic drums propel the stirring 'The Bonny Bunch of Roses', a vintage recording given the full Sproatly treatment, almost dub style. Theremin wisp’s around the aged and sampled vocal whilst bass and guitar add a hint of mischief and texture. 'Ribbons' follows and is a wyrd masterpiece, a slow build hum of electronics and acoustic guitar with voices reverberating within to create something almost sacred; a folk hymnal. 'Lonely Scapa Flow' is a rustic calypso, fiddle curling around the siren vocals to create an effective and unusual folk blend. 'Willoughby's Combination' is a pulsating synth piece of bucolic electronic that utilises vocal samples and an earworm melody to great effect whilst 'Wassail' is hearty and dark tinged plea for a bountiful harvest, cascading guitar and harmonies drifting over an organ drone; one can imagine this being performed on Summerisle in years past. Penultimate track 'The Mistletoe Bough' is a spoken word ritual, a ghost story set to a heartbeat drum and a shruti box before 'Lullaby' closes the album, the very melody that sees Edward Woodward anointed as he nears his doom in Robin Hardy’s The Wicker Man, our third visit to this film. Sproatly once again make this track their own, indeed their blend of acid folk, electronica and experimentation feels like a direct continuation of soundtrack composer Paul Giovanni's questing spirit.

An interim album this may be but 11:59 is one which ably stands on its own as a masterful release in its own right. Full of nooks, crannies and genuine curios this is a haunted treasure trove of an album, a dusty and dark curiosities shop filled with hidden delights. It is close to midnight, why not lift the veil and see what lies beyond?

Available now as a download and CD from Sproatly Smith’s Bandcamp page.