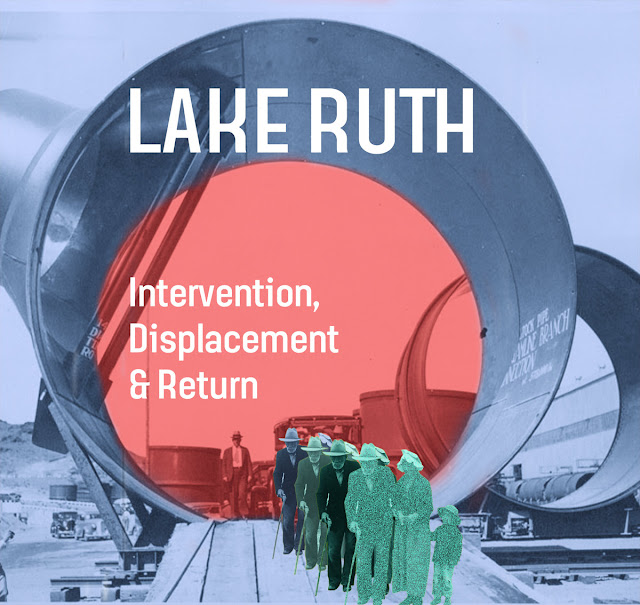 Those who enjoyed "Chante" the other week will want to pay attention for the next few minutes.

Lake Ruth has a long relationship with the Active Listener. We like them an awful lot. They seem to like us too. Everyone wins. Especially you because we're not going to let them release anything without you knowing about it. Which brings us to their brand new release "Intervention, Displacement & Return" - not an album proper I guess, but every bit as good as one.

Available as a limited edition cassette from French label WeWant2Wecord, "Intervention, Displacement & Return" features eight tracks, a combination of new recordings and a few covers that have appeared elsewhere. Best of all are three tracks recorded in collaboration with Listening Center, a music blogger's dream combo, but not a dream that one would ever expect to come true. Lucky us then.

Debut "Actual Entity" should really be quite a hard act to follow, being one of last year's better albums. Lake Ruth has cheated just a little bit in that regard by bringing us this sort of stop-gap release now then, but truth be told, it's every bit as good as "Actual Entity". Or better. While it doesn't harbour the same ambition or the same unity of purpose as a full album, it shows a band growing more comfortable and confident with who they are and the musical lineage that they follow in.

Even the two covers here, Stereolab's "Monstre Sacre" and Le Superhomard's "Dry Salt In Our Hair", are tackled with such confidence that they instantly become Lake Ruth tracks - I challenge anyone who doesn't know the original versions of either of these tracks to pick them out in a line up as the imposters that they are.

Vocalist Allison Brice continues to be a commanding presence, unusual given the delicacy of her voice, but whether it be the moody ambience of "A Captive Reaches The Sea" or more driving fare like "Dry Salt In Our Hair" she's able to command attention with barely a whisper. Full marks to Hewson Chen and Matt Schulz too for providing the wonderfully diverse backdrop here, equally well versed in psychedelia, space-pop, library music - you name it. Whatever the musical equivalent of well read is, these boys are it.

At only eight tracks I was left wanting a whole lot more, but isn't that a sign of the best records? And the good news is, we don't have very long to wait for more with Feral Child lining up a vinyl release for Lake Ruth's second album shortly, but more to come on that soon.

"Intervention, Displacement & Return" can be purchased on cassette and streamed in full at the first link below, or bought digitally for the bargain price of just $6 via the second link.