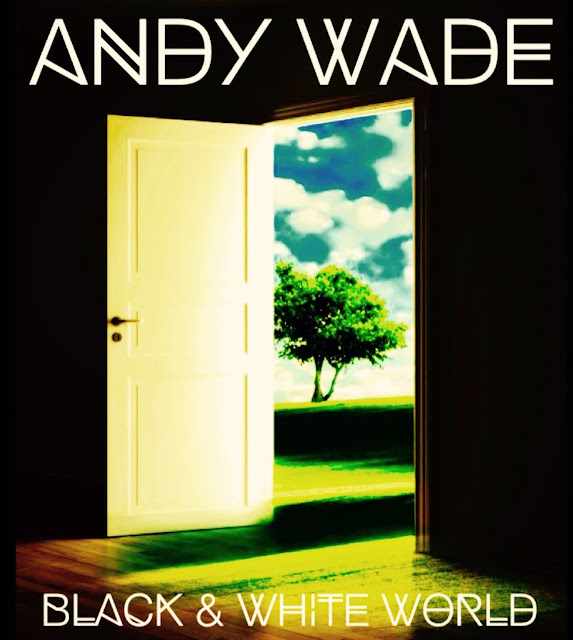 Andy Wade (brother of Dodson And Fogg's Chris, and partner in the excellent Rexford Bedlo with him) casts a third album into the light, following his excellent debut 'Pushing Senses' and equally impressive sophmore effort 'Fix It Till It's Broken'. Writing, playing and producing this almost entirely himself, Wade's creativity and drive is never in doubt; this is an album of finely honed and genuinely felt gems that are clearly a labour of love. We are to be thankful that we too can step into Wade's world and enjoy these musical vignettes, full-on psych rockers, and late night laments.

'Open' begins the album with a delicate and melancholic piano refrain, keyboard ebbing and falling and a gentle double bass accentuating this reflective and wistful piece. It is followed by the pulsating Hammond and acoustic melody of 'Sky Turns Blue' which adds guitar and percussive muscle to it's tortured, bluey crawl as it hits stratospheric heights with a fiery, volcanic solo that evokes both Neil Young and The Bevis Frond. Wade's previous recordings have evidenced his easy way with using different genres and moods to frame the songs and 'Black And White World' is no different. The title track is an example; a reverb drenched piano lament in its initial moments, it weaves and warps with bursts of psych guitar and strident drum breaks whilst all the while holding the central melody and heart-rending feel of the song itself. 'Prowl (Part 2)' (part one being on 'Fix It Till It's Broken') is by turn an electronic and motorik travelogue, syncopated drumbeats and keyboard stabs propelling the track along on a dread filled and ominous late night ride through the city that evokes the soundtrack work of John Carpenter. Next, 'Lazy Days' takes us into a hazy kaleidoscopic dream of summers past, gorgeous echoed guitar arpeggios and a nostalgic vocal melody that ably conjures images of sun flecked afternoons and long warm evenings. 'Intermission' returns to the electronica based sound of 'Prowl', new wave guitars picking their way through waves of vintage synths in a manner that recalls the classic 'Real Life' era of magazine. 'While You Dream' then takes us somewhere else entirely; an accomplished acoustic, late night ballad with Wade's classic English vocal that Ray Davies or John Martyn would have been perfectly happy to have written. This more reflective mood continues with the emotionally fragile and heartbreaking 'Two Halves Make A Whole'; fans of the aforementioned Bevis Frond but also Bob Mould and Husker Du will adore this. 'Lullabye' reintroduces the piano to highly powerful effect, a lonely and sombre paean that reverberates and flickers candlelike throughout the dark, solitary and long night. Instrumental 'Slip Slide' lifts the mood with a cascading keyboard melody and playful guitar break that shifts the atmosphere of the album once more; Wade’s music covers a wide palette of feeling and musical style yet this only satisfies all the more. There is a delight in the breadth of emotions and styles, a joy that revels in this album's playful unpredictability. 'Nothingmore', an album highlight, is a banjo flecked slice of psych folk beauty, glistening piano notes and a descending acoustic melody framing Wade’s double tracked vocals like stars accompanying an expansive and richly hued sky. 'Not That Guy' is a superb slice of classic psychedelia with hints of Robbie Krieger guitar whilst 'Only One And Only' is a wide-screen and windswept slide guitar driven retrospection; both are equally impressive and emotive. The album closes with the piano piece 'Hope', a return of sorts to where the album began. Indeed, this is a carefully paced and constructed album that flows from emotion to emotion, genre to genre with a masterful command and watchful eye.

To conclude then, Wade has delivered a third album of richly detailed and presented psych rock and folk but with the same thirst for creation and inventiveness that marked his first two long players. It may be a black and white world but Wade 's universe is filled with every colour, every shade; join him there.

Available now on Amazon and I-Tunes as well as from Wade's own website.