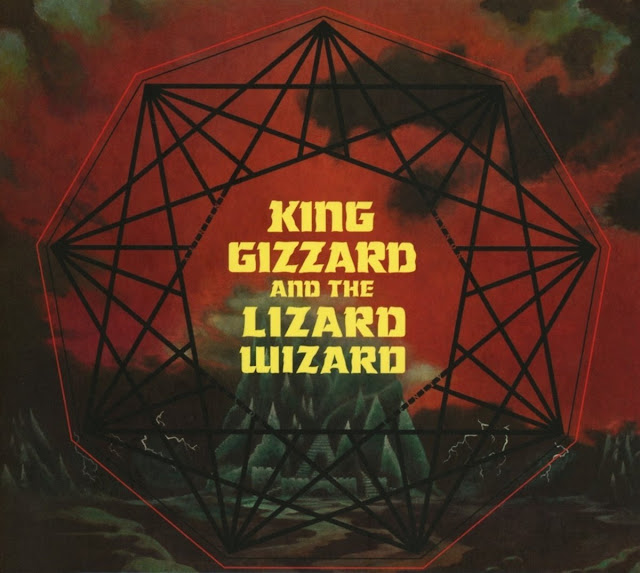 So after waiting literally weeks for a new King Gizzard record to come out, it is finally here and my goodness have they delivered an astounding piece of work with ‘Nonagon Infinity’.

After the pastoral charm of last year's ace ‘Paper Mache Dream Balloon’, Stu MacKenzie and his band of merry men have gone back into the lab, gobbled Christ knows what and cooked up something so hugely amazingly exhilaratingly MASSIVELY BRILLIANT that it threatens to eclipse all other releases in 2016 with its sheer power, deployment of ninja-level chops and dazzling sonic attack. This record is the aural equivalent of being strapped to the outside of a Saturn 5 rocket after being dosed up on PCP and being launched at light speed into an expanding and exploding cosmos. Yep. That’s right. You heard me ok. Give me a minute to find my brain and I’ll tell you a little more about it. Thanks.

So, ‘Nonagon Infinity’ is essentially a concept piece; a 37 minute song suite depicting an intergalactic fairground ride, that picks up (arguably) where 2014’s ‘I’m In Your Mind Fuzz” left off. All double speed drums, song fragments recurring endlessly across the duration of the record, cymbals phased and flooding over the proceedings like a burst Hoover Dam and some very precise and nifty time changes and guitar slinging. Check.

“Robot Stop” is probably the best opening number I have heard on any psych rock record in the past 20 years and sets up the rest of the record perfectly. Guitars fizz and sting, pivoting and spinning around, rhythms concuss and transport you at lightning speed, punctuated by automaton vocal lines that provide no comfort but exhort you to hang on tight and leave your body behind. “Big Fig Wasp” carries on the charge with its subtle variant on the opening theme before crashing into lead single (how mental is that?) “Gamma Knife” which is a catapulted Orgone Accumulator – fully loaded and with its controls firmly set for the heart of the sun – all crashing drums, fuzzed harmonica and raga guitar lines. Perfection.

‘People – Vultures’ over a slow and sludgy Sabbath/High Tide type riff – its minor scale smouldering and foreboding vocal giving this listener a distinct sense of unease. This lasts for at least a millisecond before the accelerator is pushed to the floor and we speed off again on a crunchy metallic guitar raga and several very tastefully timed war whoops. It’s a wonderful scary nonsense that seems to be powered by a boundless energy and psychotic relish sending me further and further away from planet Earth. My knuckles are white, my eyeballs firmly reversed and peering at my quivering brain. I AM AT THE EVENT HORIZON. Then…

After 18 minutes of striving to achieve escape velocity, we are finally beyond the gravitational pull of the solar system and we can take respite in the gloriously funky and pure 1970’s groove of ‘Mr Beat’ with its snappy hook, beautiful guitar lines and warm Hammond organ riffs. Can you smell the fondu? That’s not food, that’s your brain stewing my friend, the kitchen hasn’t been used in years….I am grateful for the opportunity to breathe.

Intrepid explorers like this crew are never likely to rest on their laurels for long. Not when so much of our universe is unknown and untamed and so the intermissions ends and we put our space helmets back on….

“Evil Death Roll” immediately makes a grab for the title of this centuries “Masters of the Universe” mantle, the wind of time blowing through it like a cosmic wind emanating from some distant supernova. Its big on pinnable influences but also drenched in that peculiar King Gizzard juice that can only have been dreamt up by our premier Aussie space explorers. Warp speed psych perfection? Don’t mind if I do. “Invisible Face” is a progtastically mental bossa nova – a bit like if Caravan had recorded their second lp in a state of mania after bingeing on espresso and amphetamines. “Wah Wah” with its jazzy drums and phased sonics is essentially a twisted rewrite of the ‘Mission Impossible’ TV theme tune fed into the cosmic blender and jettisoned into deep space. I have no idea what it’s on about but I like it. A lot. George Harrison wrote an inferior song with the same name years ago. He would trip out on this tune I reckon would George, all barefoot on his Iranian rug, his chakras nicely aligned and pulsing skyward. In fact maybe he is as I write this?

Things reach a suitably stupifyingly dense and dangerous denouement with the drum led “Road Train” which is probably what Hawkwind would have sounded like if they hadn’t sacked Lemmy. And had taken more drugs. And listened to The Damned and early 80’s metal records. Probably. It ends as the record started signalling the infinite loop that has been triggered by the opening of the door…

So there you have it. ‘Nonagon Infinity’ - a record that exhilarates, terrifies, comforts, amazes and makes you consider the possibility that yogic flying may not be impossible after all. It is truly a monster, it is truly a masterpiece, it is truly one of the wonders of the modern world. Grab it. Now.

CD, vinyl and digital available here (UK,EU), or here (US).