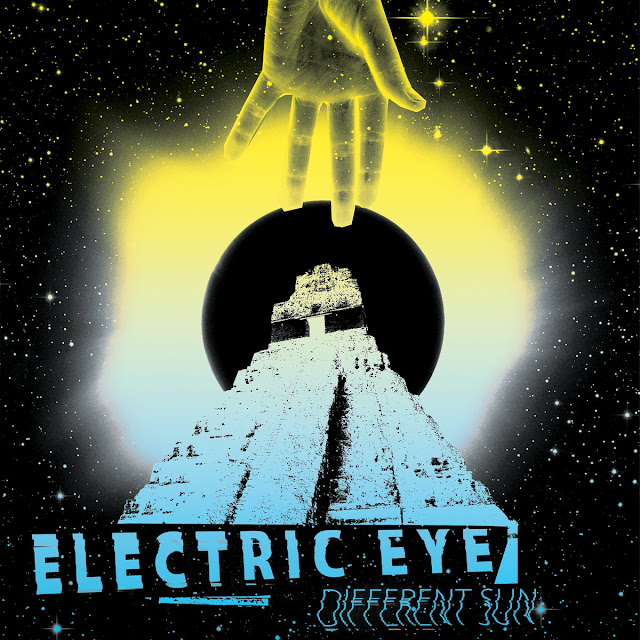 Norwegian space-rockers Electric Eye had an immediate wow factor that really impressed me on their 2013 debut "Pick-up, Lift-off, Space, Time". It's the sort of album that you can imagine a band anguishing over how to follow up and ultimately distintegrating in the process. Yet, three years later that follow up is here (much to my surprise), and I'll admit that its very existence caught me completely unawares. So, a very nice surprise, but my expectations were low. At best, I was hoping for more of the same, but what we have here is so much more than that, that it makes its predecessor pale in comparison.

The band's description of their sound is a good one: "Electric Eye play droned out psych-rock inspired by the blues, India and the ever more expanding universe. On the band's inspirational mix tape, you will probably find songs from the The Black Angels, Wooden Shjips and Pink Floyd in Pompeii."

That alone should have you searching for the play button, but their description fails to take into account something that only an outsider can objectively hear: their songs are every bit the match of their influences, a big step up from the hundreds of imitators out there who spend so much time striving for a particular sound, with the songwriting becoming a secondary consideration.

"Heavy Steps on Desert Floor" starts out with a hypnotic prog/psych vamp that could easily carry the weight all by itself, but as soon as the heavily treated vocals enter the fray it becomes all about the song, a great melody leading the way, with carefully balanced instrumental counterpoints regularly cropping up in a supportive role. "Mercury Rise" goes a step further - the sort of indie / psych hybrid that bands like TOY and Tame Impala occasionally get just right. Frankly, it bangs a gong and gets it on with a great Bolan boogie, without losing any of its spacey, kraut groove. How it does so, I can't even begin to explain. And that's the sort of album that this is; unexpected and inexplicable in equal measure. And then it ends beautifully, in open tribute to the album's other major influence, Pink Floyd: "Part One" is all unhurried grace, squalls of gently undulating seagull guitar that could have come straight off "Meddle", with keys wafting in on a solar breeze gently prompted by Njål Clementsen's bass. In its second half it becomes as close to a continuation of "Shine on You Crazy Diamond" as I've ever heard; a lovely, moody comedown from the more propulsive highs that have preceded it.

So, I know I've said this before, but this is the ultimate Electric Eye album. I'd love to be proven wrong in the future, but for now I'm a very happy listener indeed. Do not miss out on this one.

CD and vinyl available here (UK/EU), or here (US). Full stream and digital download available through the Bandcamp link here: