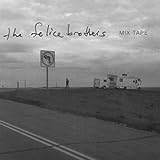 The Felice Brothers have amassed an impressively large back catalogue in a fairly short space of time.
As well as their four widely distributed studio albums, there is also a multitude of self released albums and E.Ps for the discerning listener to track down, with Mix Tape being the easiest to find, and in my opinion, the most rewarding.
Released after Yonder Is The Clock, this was initially reported to be a collection of outtakes from that album but actually turns out to be the results of a whirlwind two day recording session, put together to alleviate certain financial problems.
Originally only available at shows, it's now sporadically available at Amazon ( click the picture link above ) or can be bought directly from the band's website here.
Although aimed at more hard core fans, I'd have to say I prefer this to the more well known Yonder Is The Clock. Where I found Yonder to be a little meandering and overlong at times, Mix Tape is much more concise and lively - quality winning out over quantity.
It seems cliche now to describe a Felice Brother's song as Dylanesque, but nonetheless opener Forever Green is a lovely Dylanesque ballad that would have fit in nicely on Tonight at the Arizona.

Ahab follows and is an endearingly loose tale of heartbreak comparing Christmas Clapton's elusive love interest to Herman Melville's uncatchable whale.
White Limo ( previously known as Cincinnati Queen ) is an upbeat concert fave which translates well to a studio setting with it's lively Garth Hudson organ. It's immediately apparent why the Felice's often use this as an encore.
Let Me Come Home is a forlorn plea for forgiveness that sounds like recent Tom Waits.
The Captain's Wife starts very loosely and sounds like something you'd hear drifting out of a Saloon in the old west, with some unsettling fairground organ creeping it's way in by the end.
Up next is Indian Massacre, which continues The Captain's Wife's old west preoccupation and if anything sounds even more timeless with it's forlorn fiddle and accordion accompaniment and ragged massed vocals.
Old Song ( also known as 17 Years ) is a sparser proposition, a piano ballad, and a tribute to a lost friend.
Marie comes from the Frankie's Gun school of songwriting with more than it's fair share of memorable couplets.

Closer, Marlboro Man was the highlight of their Daytrotter Sessions appearance and is reinvented and improved upon here here with a much more atmospheric arrangement, and a pretty good attempt to replicate Neil Young's staccato guitar solo style.
Well worth tracking down then, and a suitable alternative for those struggling to come to terms with Celebration, Florida, although you should bear with that too.....