Great Albums You May Have Missed 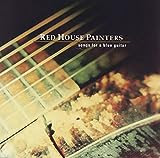 Often credited ( or blamed depending who you talk to ) for kickstarting the slowcore movement, Mark Kozelek's Red House Painters were one of the best alternative guitar bands of the nineties.
4AD picked them up in 1992 on the strength of their demos, which were then released as their first album Down Colorful Hill.
Over the next three years they released another three critically well received albums through 4AD, before problems started to arise. The label decided that some of the material Kozelek had recorded for his newest album, Songs For A Blue Guitar needed a bit of editing. Kozelek had been working with more of an exploratory live approach to some of this new material and to his credit, stood his ground and maintained that the process was as important as the result to him. The end result being of course that Kozelek jumped ship and released the album through Island.
The album is a bit of a departure with a much more organic production which suits the material much better than the heavy handed approach employed on previous releases, and has dated more gracefully as well.
Although a lot of fans seem to prefer the earlier material, this to me is the first appearance of the classic Mark Kozelek sound, and one of my favourite albums of the nineties.
The track which seemed to cause 4AD the most agitation is Make Like Paper, a twelve minute guitar monster with exploratory guitar solos often twice the length of the verses, and pounding drums. Despite it being quite obvious which parts were making the suits sweat, there's not a wasted note on display and you can really see why Kozelek had such belief in it.
Also unexpectedly good on the rockier front is their re-imagining of Paul McCartney's godawful Silly Love Songs. Now I'm a fan of Sir Paul, but also of the opinion that his seventies output would have been a lot better if certain singles hadn't seen the light of day, this being one of the chief offenders. Retaining the lyrics only, it's completely recast here as a meandering minor key Crazy Horse rocker ala Cortez The Killer.

The Car's All Mixed up and Yes's Long Distance Runaround also get the unlikely cover treatment and both stand up very nicely.
There's a lot of good stuff on offer on the acoustic side of things here too. Opener Have You Forgotten is in some ways the archetypal Red House Painters song - Cameron Crowe thought so, he commisioned a rerecording of it for Vanilla Sky.
Feel the Rain Fall perks things up a little at the midway point and Song for a Blue Guitar is a beautiful male / female duet which wouldn't sound out of place on a Mazzy Star album.

Definitely a turning point for Kozelek, this is the album that made his later solo albums and Sun Kil Moon material possible, and is an ideal starting point for beginners.