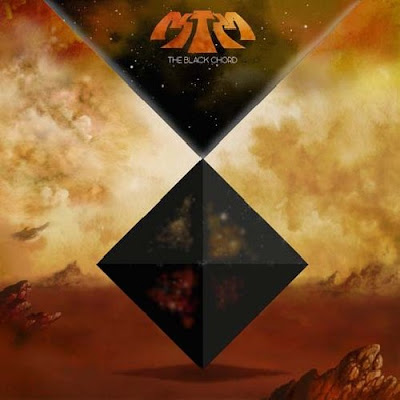 The second album from San Diego's prog rock ambassadors does a fine job of consolidating and improving upon what was an impressive, but overlong debut in 2009's "The Weirding".
"The Black Chord" has been out for a couple of months now, but I'm only just catching up with it. I'm glad I made the effort.
"The Black Chord" trims all of the traces of extraneous jamming that occasionally undermined "The Weirding" and instead focuses on tight riffing, complex multi-part suites and even the odd chorus.
It's refreshing in this day and age to hear a contemporary prog band who aren't reliant on crossing over into metal territory to gather fans.
Instead Astra's idols seem to be the holy triumvirate of King Crimson, Yes and Pink Floyd, and they do an admirable job of evoking the masters without ever sounding derivative.
Walls of mellotrons help recreate the vintage atmosphere, with soaring Gilmouresque lead guitar and treated vocals ala Hawkwind also doing their part. There's also a genuine epic stoner prog anthem in album closer " Barefoot In The Head" which stomps, struts and soars in all the right places.
Definitely one for those disillusioned with modern prog rock, but also ballsy enough for the younger crowd. They're working their way towards a masterpiece, and at this rate the next one could be it.
For the time being however, this will do nicely.
Buy The Black Chord On CD Here.