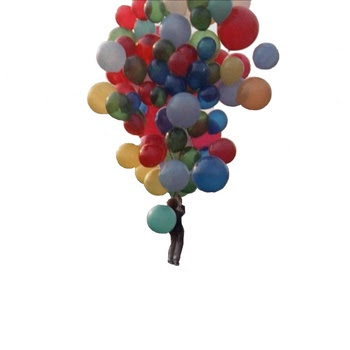 Becoming a record collector in the age of e-bay has made me dubious of the tag pop-psych. Where once it meant exactly what you'd imagine ( psychedelic pop music ), in the last ten years or so the genre definition has evolved to encompass pretty much any harmony pop music recorded during the psychedelic era, seemingly as an excuse for dealers to charge ridiculous prices for otherwise best forgotten LPs.  I was doubly concerned then, when the good Sir informed me that his solo LP, "The Popsike World of Sir Psych" was much poppier than the material that his band, the Smoking Trees have produced.
I needn't have worried however, Sir Psych's solo opus ( recorded in a whirlwind 12 days ) is pop-psych with the emphasis firmly on the psychedelic. If the Smoking Trees material is much more psychedelic than this, I may not have a sufficiently expanded mind to take in a whole album of theirs in one sitting.
Sir Psych is a scholar of psychedelia and has clearly learned plenty from the masters. The album has a dreamlike flow which reminds me a lot of some of the albums coming out of England in the late sixties when psychedelia was beginning to turn into prog-rock, an age where albums were being viewed as more important statements than singles. The atmosphere is similar to Family's "Music For A Doll's House", without actually sounding like it at any point.
The flow is aided by well placed spoken interludes and is laced throughout with lysergic references to fairgrounds, backwards instrumentation and other trippy effects, sitars, harpsichords and even a bonus track from the Smoking Trees, "Merry Go Maggie" a whimsical pop anthem which sounds like I wished the Hollies psychedelic albums sounded, with an outro groove which would do Sgt. Peppers proud.
Wonderful and full of hooks.

The whole album is available to stream here:
Then visit him here on Bandcamp and buy it for the criminally low price of $4 U.S digitally or $6 for the CD.