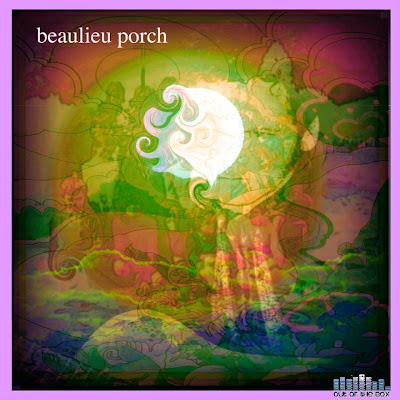 Beaulieu Porch is the work of one man, the multi talented Simon Berry, and judging by this he's some sort of twisted, psych pop genius.
Those who are in the know ( i.e those who aren't me ) may well have been aware of his excellent "Colour 55 / Navy Blue " 7" released by The Peppermint Hill Label. Having just ordered a copy I can happily confirm that it's still in print, but it's a limited edition of 300, so surely won't be around much longer - order here.
Beaulieu Porch's debut full length is quite possibly the most purely enjoyable psych-pop release I've heard this year so far. It's undeniably psychedelic, often openly borrowing from the spirit of the sixties, but is unmistakably contemporary in it's execution.
He's also got a very distinctive sound of his own. Witness the way "Navy Blue" effortlessly evokes both late period Beatles and Air's Virgin Suicides without losing touch with his own aural identity - not an easy task when channeling the greats.
It's a huge, kaleidoscopic album, with all the bells and whistles one would hope for from an ambitious piece of modern psychedelia, with plenty of memorable tunes at it's core.
A near perfect marriage of substance and style then, and one that I would recommend checking out as soon as possible.
And don't even get me started on those wailing guitars at the end of "The Colour 55". Lovely.

Beaulieu Porch's Debut is Currently Only Available Digitally. You Can Buy It Here.