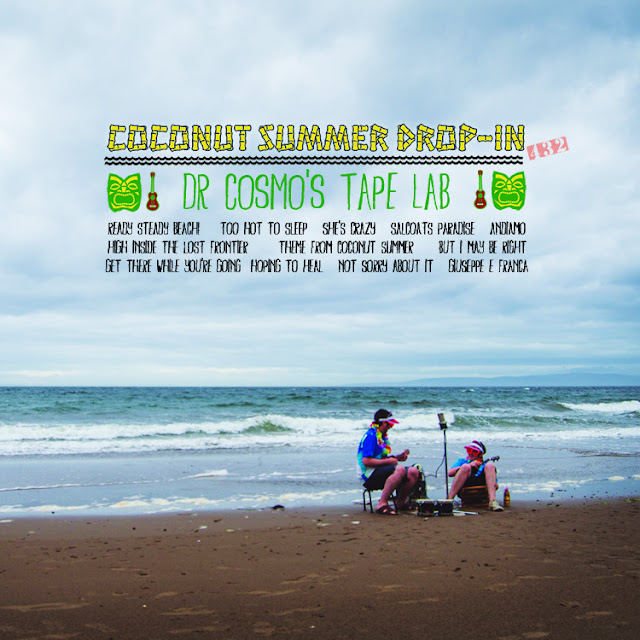 Coconut Summer Drop-In 432 is Dr. Cosmo’s Tape Lab’s second album of 2015 (and third in less than a year), and I swear to god, this band just keeps getting better and better.

On their new plate, the spaceheads are at the beach, using the sound of the Beach Boys, circa "SMiLE", as a launching pad to explore yet another corner of the psychedelic pop spectrum.

It all begins with a rousing cheer—“Ready! Steady! Ready, steady, BEACH!!!”—that quickly morphs into an honest-to-goodness song, with the perfect melodies that we’ve come to expect from this band. A whimsical arrangement has ukeleles occupying the same space as theremins.

“Too Hot To Sleep” comes next. It’s a bouncy pop tune sung partially in Spanish, although it never really recollects anything remotely “World Music.” At the end of the song, the arrangement briefly devolves into a drum machine-propelled interlude that sounds like a lost piece of “Revolution #9.” “Everybody’s talking about biscuits,” they chant.

A segue into the pure cheese pop of “She’s Crazy” keeps the beach ball rolling with lots of space echo and toy xylophones propelling the album along until the ukuleles come back, joined by steel guitar and synthesized ocean sounds for the mostly instrumental “Sailcoats Paradise”.

“Andiamo” brings us back to something closer to a pure psychedelic indie pop sound. And, in typical Tape Lab fashion, it’s perfect.

But the Beach Boys-isms keep coming back: “High Inside (The Lost Frontier)” shamelessly rips off the sound of (and bits of melody from) “Surf’s Up.” While “Get There While You’re Going” opens with a guitar lick reminiscent of “Help Me Rhonda”, but the lyric about travelling by train and “seeing the nation’s towns pass by before our eyes” smacks of the Americana themes that Brian Wilson and Van Dyke Parks obsessed over once the cars and surfing themes were left behind.

If the album weren’t so damn good, one could write it off as a mere exercise—an experiment in imitation. However, like XTC’s The Dukes of Stratosphear project, the songs are good enough to rise above any such concerns. It’s another winner from these extraordinary Glasgowians, who are quickly proving themselves one of the best bands working today.