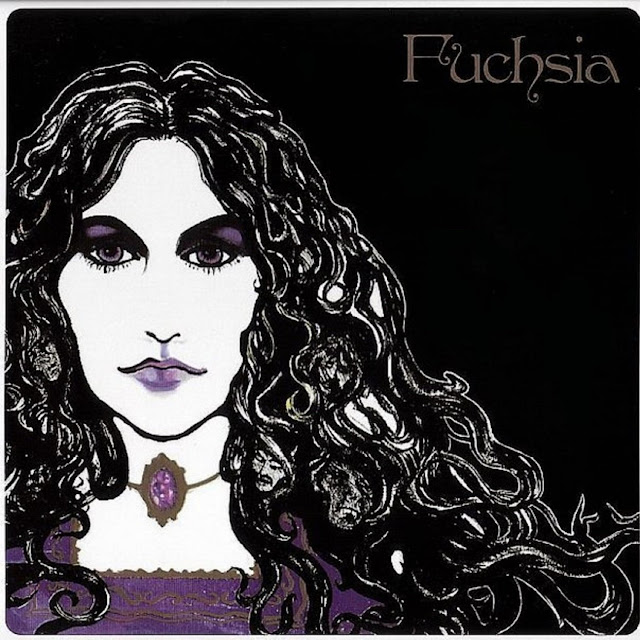 Ah, here's a timely reissue to get (re)acquainted with. Cherry Red continue their tasteful and discerning 'official' reissue programme with the debuty long player of underground heroes, Fuchsia. Originally issued in the UK on the tiny Pegasus Records in 1971, it is a singular piece of work that doesn't sit comfortably in any one particular spot but agitates and spins a web of its own sometimes chaotic and shady muse - part acid folk, part progressive rock, part psych, all underpinned with a haunted, furtive vibe. Fuchsia were most definitely digging their own scene.

Opener 'Gone with the Mouse' is all twists and turns with galloping male lead and haunting female backing vocals overlaying a claustrophobic vibe that comes off like a slightly more hinged Comus. It certainly grabs your attention and sets the tone for much of the record with its vertiginous spirals and atmosphere of edginess. Following next, 'A Tiny Book' comes on like a bleaker, more bucolic 'Forever Changes' with some lovely swooping cello and a minor key guitar motif that may or may not have a passing acquaintance with 'A House is not a Motel' before launching into a phantasmagorical bossa-nova section where 'cadaverous hands reach out to hold me' and coming to a halt with some martial drumming, fingerpicked acoustic guitar and more lovely cello work. It certainly is a trip.

'Another Nail' emerges from some foreboding and caterwauling strings to reveal itself as a folk-rock stomper, all descending electric guitar riff and straight ahead tempo. If Free had written 'Alright Now' after a lost weekend on mushrooms and laudanum it may have come out like this. Well at least the first 3 minutes - the second half of the song breaks loose and flings itself, into a sonic pool of dirge and abstract lyrics before submerging out of sight and sound.

"Shoes and Ships" offers some relief with its swimming strings, major chord progressions but still has a yearning quality to it that barely again reflects the sense of dread that permeates pretty much everything on offer here. It is a testament to the skill of Tony Durant as principal writer and arranger that this approach doesn't descend into an endurance test of melancholia but he is a redoubtable ship's captain and his boat rides the waves with a strong sense of direction. He is heading somewhere.

'The Nothing Song' is a nihilistic exercise with some fairly dissonant guitar riffing, queasy sea-shanty strings, martial beats and a lyrical worldview that shows how quickly the optimism held by many just a few years earlier was being extinguished as reality bit back. 'Me and My Kite' is the most recognisable track here, having decorated several compilations over the years and also having inspired a bunch of Swedish inner-space cadets to name their band after it. This activity seems to have coaxed the Fuchsia main-man out of retirement and he has recorded with them. The song itself is one of those classic carefree, immediately familiar, slightly melancholic numbers that typifies the era in which it was conceived - a little frayed and burnt out but delightful nonetheless. It is also the song that best suits lead vocalist and songwriter, Tony Durant's reedy vocals that may sound a little strained elsewhere to some. A lovely daydream of a song that could easily have graced one of the great Kevin Ayers records from the early 1970's. That good.

Ceremonies are concluded with the minor key kiss-off, "Just Anyone" which has a lovely line in lap steel guitar before evaporating on a cloud of fingerpicked acoustic guitar. Like much of the material here it feels somewhat unresolved. Unfortunately for Fuchsia, that resolution would not be found in any subsequent recorded material by the band as they made their exit without releasing anything further (until Tony released a belated sequel in 2013).

So there you have it. A welcome reprise for the Fuchsia LP. Whether the recently reactivated Fuchsia has it in their locker to come back and write something as substantial and memorable as this record remains to be seen, In the meantime Tony Durant can reflect on the fact that few musicians make anything as good as this. Investigate.