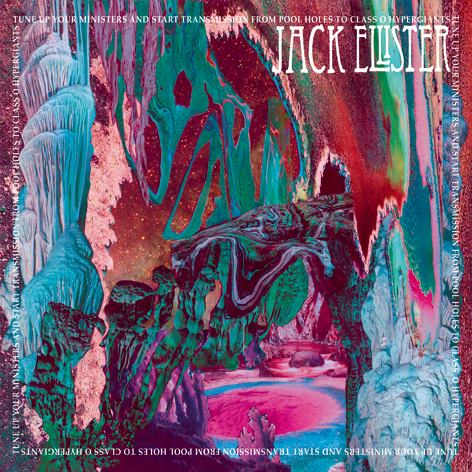 The quality and stylistic diversity on Jack Ellister’s "Tune Up Your Ministers And Start Transmission From Pool Holes To Class O Hypergiants" is what makes it a truly spectacular debut album. Its most prominently rooted in rock, space pop, and folk, with a strong sense of vintage psychedelia. Ellister’s sound brings to mind many comparable bands, such as Strawberry Alarm Clock and The Tea Company, while at the same time continuing to keep it new and fresh.

The first track, “The Man With The Biochopper”, opens with high-energy spaced-out guitars accompanied by vocals rather similar to David Bowie’s on "Aladdin Sane". The song has a strong sense of 1960s psych and also includes organs, as well as a classic lysergic guitar solo in the middle. Aspects of krautrock are apparent too. It ends with increased fervor and screaming vocals while the follow-up, “The Sun Sends Me Hails, Vic”, takes an acoustic turn with lightly strummed guitar and simple vocal harmonies. This is coupled with trumpet and ends in droning bagpipes. At many points this track reminds me strongly of a jig.

A happy-go-lucky sing-song, “Saddle Up The Horse” swirls together acoustic guitar, piano, and squiggling saxophone with whimsical electronica. Tempo and intensity pick up and a very steady rhythm sets the pace. “Saddle Up The Horse” is also a tad bit folksy. The next track, “Calm Adapter” is true to its title, calm. Slow and foggy, it features drowsy oscillating background synths.

“Wishmachine” begins by reciting the album title, “tune up your ministers and start transmission from pool holes to class o hypergiants,” in highly reverbed vocals. For the rest of this short track, which also features jazzy Eastern-inspired guitar funk, extraterrestrial voices chant “love the wishmachine”. It’s both fun and slightly eerie.

“Old South” is an acoustic piece about returning to a place that’s calling one back. Nostalgic and bittersweet, it brings to mind images of pastoral beauty. Though the vocals are mellower and Ellister sings of returning instead of escaping, this track reminds me of Led Zeppelin’s "Going to California". “Curator” is more ominous. Chilling reverb and bass vocals all contribute to a darker sound than previous tracks. Muted and highly melodic, over steady percussion, the spacing of the reverb gives it a pulled apart sort of feel. It fades out after a frolicking of what sounds like musical saws.

The finale, “A Hunter Needs A Gun”, is ethereal and chillingly beautiful. This is one of the most compelling tracks on the album in my opinion. With its spaced-out vibe and melancholic air it sounds similar to a mixture of Syd Barrett and early Soft Machine. Sparkly sci-fi feeling guitars skitter above the percussion and organ in the break and a trailing lingering of sounds gives the song a sense of great depth throughout.

While this is Jack Ellister’s first album, he has previously released covers of classics including Pink Floyd’s “Flaming”, The Beatles’ “Dear Prudence”, and The Rolling Stones’ “Citadel”, all of which are excellent, and will give you some idea of the sort of ballpark he'd like to find himself in. He’s highly creative but remains accessible through the extreme catchiness of his melodies.