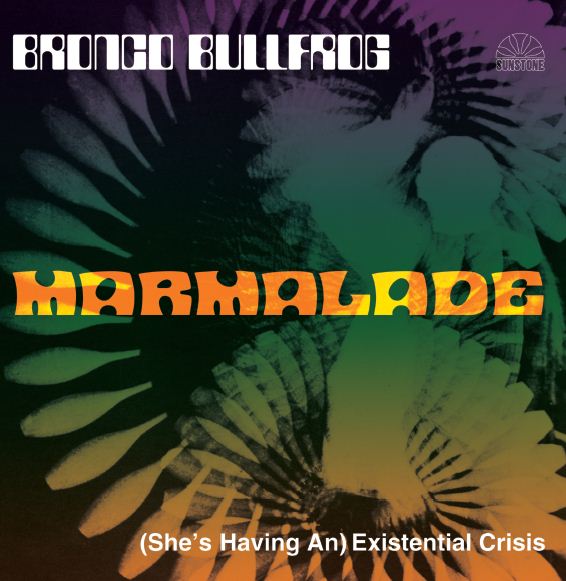 After recording a bunch of rather good revival records during a period of time where such things went largely unappreciated, and by all accounts having a rather miserable time making them ("the records we made between 1996 and 2004 were almost always done under duress and almost always no fun... we had no producer/svengali figure to guide us and made a lot of mistakes and bad judgements.."), it was no surprise that Bronco Bullfrog called it quits back in 2006-ish.

The lads kissed and made up though, and have been back at it for a few years now, recording in a fashion that suits them, releasing through labels sympathetic to their cause (Fruits de Mer, State Records), and generally enjoying being in control of their own destinies in a musical climate that's receptive to big soaring pop songs that sound like they ruled the UK airwaves in 1967/1968.

And here's two more of these aforementioned gems, their third 7" since reforming, this time courtesy of those lovely chaps at Sunstone Records, which is a guarantee of quality in and of itself.

A-Side "Marmalade" is ace, a catchy wee gem sounding like it's been plucked straight off of one of those Deram singles that saw former mod bands going a wee bit psychedelic, an inventive Whoism here, a perfectly executed dual backwards guitar solo there. Fizzy pop goodness.

And that b-side? Well, it really should be much too wordy for its own good, but somehow these three manage to deliver a mouthful, latching it onto a wistful verse melody which sounds like a chorus until the real chorus hits, and elevates the song into something of a sugar-rush pop epic, all laced with that lovely Deram sparkle.

How about an album now huh?