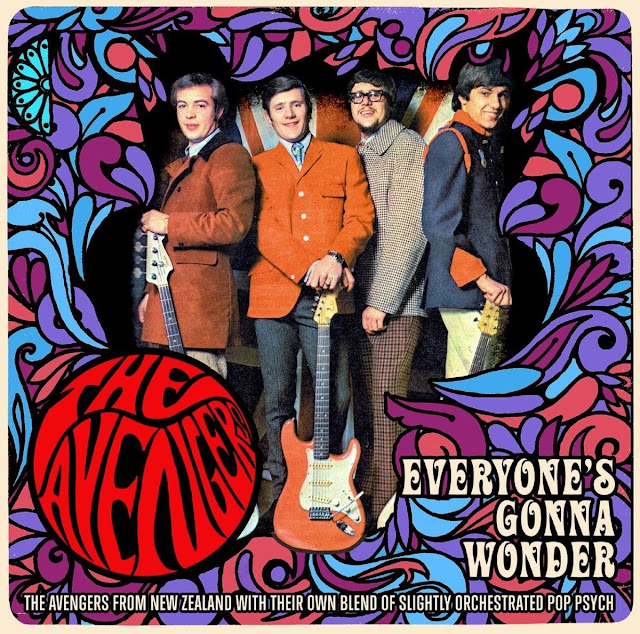 While they're relatively unknown internationally - even to psych collectors - the Avengers were genuine stars here in New Zealand during the latter part of the sixties. Their versions of the Episode Six's "Love Hate Revenge" and David McWilliams "The Days of Pearly Spencer" still crop up regularly on classic hits radio and are regarded by many (myself included) as definitive.

This collection from New Zealand sixties reissue specialists Frenzy & RPM gathers up the the majority of the band's two pricey studio albums along with a few single sides and curios for the band's first international CD release.

Impressively, the band's legacy was all put to tape between 1967 and 1969, with the band's two studio albums and sole live album all released in one calendar year (1968).

Assembled by manager Ken Cooper as houseband for his club, "The Plaice", the Avengers were essentially a manufactured pop group, initially costumed in John Steed style suits and bowlers, with their extremely successful first single ("Everyone's Gonna Wonder") coming from an outside writer - Chris Malcolm. Fear not though, New Zealand Idol this is not; the band gelled quickly and soon proved themselves to be gifted performers, writers, and interpreters.

Not unusually for the time, their first album, "Electric Recording" threw a little bit of everything into the pot mixing pop, mod, beat and psychedelia in fairly equal measure, along similar lines to the first Aphrodite's Child album or early UK Bee Gees albums. As debuts go it's a very strong effort, but the best was yet to come.

"Medallion" may well be the best album to come out of the local sixties psychedelic scene, and is every bit as colourful and lurid as it's sleeve. New Zealand's studios at the time were pretty primitive so local attempts at psychedelia often fell a bit flat. That's certainly not the case here though; while the Avengers were definitely more on the pop-psych end of the spectrum rather than psych-pop, tracks like creepy stand-out "Midnight Visitation" stand up remarkably well production-wise against similar material recorded in more affluent UK based studios. Compare "Midnight Visitation" to the Yardbirds' "Turn to Earth" for a prime example of this.

There's not much missing from the two albums here and the extensive liner notes and top mastering make this a very fine substitute for those who don't have the $300 you'd have to lay down for nice original copies. Now let's do something about reissuing the live album "Dial Triple A, Alive! Avengers in Action", by all accounts a very exciting affair which sounds like it'd provide an intriguing counterpoint to these well tailored studio excursions.