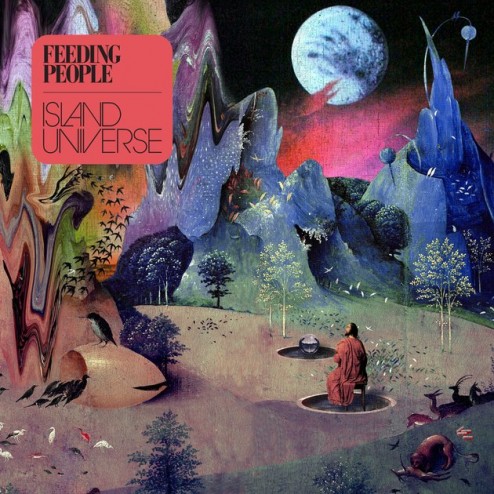 There's a lot of buzz surrounding Feeding People - and most of it centers around dynamic twenty year old vocalist Jessie Jones. Comparisons to giants like Grace Slick and Janis Joplin are being thrown readily around (although they seem to have originated in the band's press release, rather than the imagination of reviewers), making this an album that seems like it's setting itself up to disappoint.
Or so you'd expect at least.
Comparisons to Joplin and Slick may be pushing things a little, but Jones gives seventies rockers like Heart's Wilson sisters a run for their money, and as consolation prizes go that's pretty damn good.
Similarly the band's music isn't quite what we've been led to believe, but none the worse for it.
"Desert Song" and particularly "Uranium Sea" have some delightfully off kilter, woozy, carnivalesque organ work punctuated with demented seagull guitars, but the dominant flavour (and most successful in this writer's opinion) is big dumb seventies style rock (you all know that big and dumb become attributes when applied to seventies rock, right?).
They tone things back every now and then too - the title track is delicate, breezy and tropical, but they're at their best when they're loud and abrasive with Jone's voice allowed to soar. "Red Queen" and "Big Mother" perhap demonstrates this best, and play to the band's strengths - loose tempos, air guitar-worthy riffs and big fat lead bass, all delivered with a strutting bravado that belies the youth of this outfit.
So "Island Universe" isn't necessarily what you expect it to be, but check your expectations at the door and there's a whole lot of fun to be had.