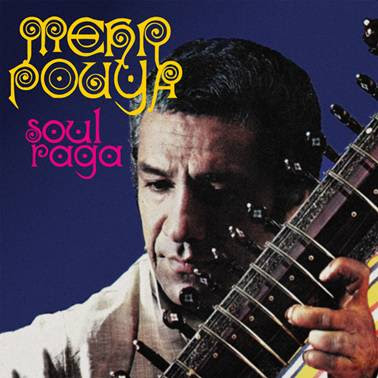 Iranian musician Abbas Mehrpouya may best be known for being the man who brought traditional Indian music to Iran, his music transcends easy categorization. He is known primarily for his sitar work, but this two-disc collection of singles and his sole album shows that Mehrpouya was a much more internationally inspired musician, and not wholly inspired merely by Eastern sounds. Sure, moments like "Soul Raga," "Ghame Tanha Instrumental" and "Solenzara" clearly put him in the same category as the masterful Ravi Shankar, it would be wrong to assume that particular sound was his masterwork. Soul Raga will surprise, for while traditional sitar music is his forte, he was just as capable of taking on Middle Eastern ballads ("Sareban"), African funk ("Ghabileye Leyli"), and, surprisingly, American musical styles like rockabilly ("To Bemani Va Man"), easy listening ("To Koyaje"), and hot jazz ("Bargizan")! He was a nimble composer, able to adapt sounds and styles from around the world and make them into his own. The best moment, however, would have to be "African Jumbo," where he takes on the endless funk of Fela Kuti and shows himself to be a master of that style as well, as the eleven and a half minutes this song requires will turn you into an ecstatic, dancing mess. That Mehrpouya easily and masterfully sponged up the musical styles of his day and reprocessed them into something so unique, enjoyable, and masterful is proof of the man's genius as a musician.