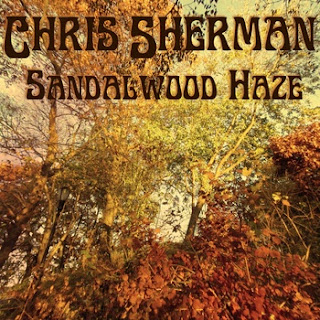 Sky Picnic frontman and sometimes Active Listener scribe Chris Sherman has released his first solo E.P. I'll have a review for it up here shortly. It's a name your price Bandcamp download, so there's no excuse for not checking it out! I'm sure a few dollars wouldn't go astray if you have them to spare either though.

Here's what Chris had to say about it : " I’ve written and recorded a solo EP that will be released this week, simply under my name due to a lack of thinking of a creative faux band to operate as.  It’s titled Sandalwood Haze and it’s a bit of a departure from what you might be expecting.  Three-fourths of the songs are deeply rooted in psychedelic folk sounds, while the closing track comes from my flirtation with writing film music.
In many ways, these songs can be seen as compliments to Sky Picnic’s output, as all of these (minus one) were written during sessions for the Paint Me A Dream LP, but just don’t really fit in with that scene.  Hence the solo EP release, as I am a believer in no good song being left behind.
All of these were recorded solo in my studio (using only 4 tracks at most!), and featuring acoustic guitar, sitar, tabla, Mellotron and vocals run through my Klemt Echolette.  These are by no means meant to be “high fidelity.”  The process was very therapeutic in many ways, and really just an exercise in writing and recording on my own.  Leah worked her artwork magic as usual and did provide some guidance.
Enough babbling.  Check it out.  I’ve made it pay what you like, as it’s just about the music and the love.  Do promise if you download it for free to spread the word about Sky Picnic!"