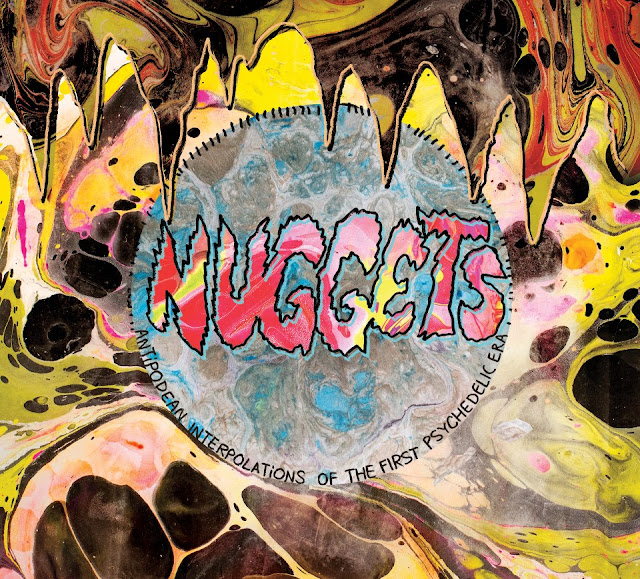 Released in November by Warner Music Australia to coincide with the 40th anniversary of Lenny Kaye's original Nuggets compilation, this sees a bunch of up and coming Australian garage and psych acts paying their respects in a suitably rambunctious ( i.e generally LOUD) fashion.
Rule of thumb for these sorts of things is that if a track is worth paying tribute to in the first place, then you're pretty unlikely to better it by offering up a faithful interpretation - a pretty straightforward concept , but one that seems to be overlooked frequently.
Fortunately there's a lot of invention to be found here, with a number of artists taking the opportunity to fully psych up proceedings in a manner not available to the original artists.
There are a few bigger names present with the Frowning Clouds faring best with their freakbeat remake of "Let's Talk About Girls" edging out solid but less adventurous offerings from Tame Impala associates Pond, and The Laurels, but it's the names that are new to me that really push the boat out.
King Gizzard and the Lizard Wizard's take on "Open My Eyes" starts off sounding like a Kit Lambert production, before being launched into the stratosphere by all manner of oscillators and a monstrous garage vocal. The Standell's "Dirty Water" is given a dense shoegaze makeover that works particularly well, while Davey Lane's version of "Moulty" has to be heard to be believed - I'm dead keen to hear more from him.
Best of all though is Baptism of Uzi who make "Baby, Please Don't Go" their own with an unlikely but ingenious eight minute plus rendition awash with analogue keyboards and wah wah guitar.
Check it out : Tops.
Also released is "Nuggets Downunder", a superior collection documenting Australia's sixties garage scene.

They've both only been released in Australia, but can be shipped internationally at a very reasonable price here.

You can stream the whole thing here.