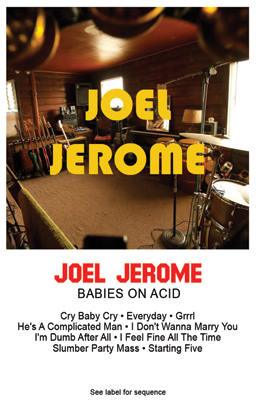 The Active Listener's listening sphere has been widening a little of late and one of the main catalysts for this re-evaluation has been the steady stream of amazing retro pop gems issuing forth with ridiculous regularity from Burger Records, who will have taken over the world by 2016 at this rate.
The latest Burger release to snag, then caress my ear in the most pleasing of fashions is from Joel Jerome of DIOS semi-fame, now recording with Babies on Acid, and hell is it good.
Pitchfork and co. would be all over this if it was released on say, Sub Pop, but as the more mainstream alternative press (contradiction? probably) have so far seemed resistant to the not inconsiderable charms that Burger has to offer, it's left to little guys like myself to wave the flag vigorously.
And an album like this one is certainly worth getting your arms tired for.
Jerome writes some of the sweetest, quirkiest pop songs you've never heard, with a vintage fifties / sixties aesthetic that suggests Doc Brown never met Marty McFly and instead took Elliott Smith on a one way trip in the DeLorean, where he was given the opportunity to soak up the very best that these golden decades had to offer first hand.
A perfectly functional cover of the Beatles' "Cry Baby Cry" does little to prepare the listener for the unstoppable powerpop juggernaut that follows, with it's addictive melodies and HUGE drums.
Sure, the quirky outsider pop of "I Don't Wanna Marry You" isn't gonna be a mainstream hit anytime soon, but for those of us weened on the likes of Jonathan Richman this is a certain kind of wonderful that we'll defend to our very last breath.
And the best news is, Joel assures me that there's HEAPS more where this came from. I'm ready how about you?
In the meantime check out "Grrrl" below, swoon, then visit Burger Records here to order the tape.