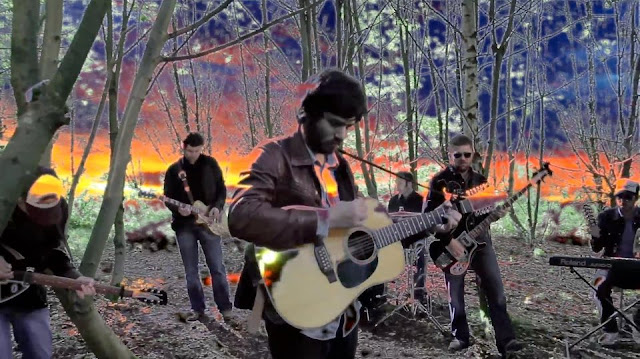 Kontiki Suite is officially one of the Active Listener's favorite bands. We had a chat with Craig Bright from Kontiki Suite about the lure of the past and the exciting things the future has in store.
I'd urge you to hit the play button below and start the album streaming while you read:


THE ACTIVE LISTENER : Tell us about the early days of the band and the build up to your debut album "On Sunset Lake."

CRAIG BRIGHT : Kontiki Suite started as a basic 3 piece band with Ben, Marcus and myself (Craig). Gradually over time, and as the songs were coming together, the line up expanded and contracted on a number of occasions with members coming and going until we landed at the what is now, the settled and hopefully definitive line up of the band. We haven't had quite as many fallen heroes as the Brian Jonestown Massacre, but we aren't far off.
'On Sunset Lake' was recorded in our own studio in Carlisle over the course of a year or so. The songs were written at various points during the journey of the band, and one or two Ben had written shortly before we came together.
Jonny produced, engineered and mixed the album. He simply wanted it to fulfill the sounds and ambition he and we had in our heads throughout the recording process. It would be foolish of us to deny the influence of the 60s and 70s, but the last thing we want is to be content with and restricted to the sounds of then and not learn from all of the great music since. Timelessness I guess would be the main aim, as utopian as that sounds.

THE ACTIVE LISTENER : "On Sunset Lake" is a favorite of mine. I haven't seen any average reviews of it so far — they all seem to be glowing. How does the band feel about the album and its reception?

CRAIG BRIGHT : We are individually and collectively thrilled by both the album as a whole and the attention and reception it has received. It's been really rather humbling to read the reviews and more private comments we have received from people all around the world. The way that Anglophile pop music can communicate so effectively with people in Norway, Finland, Spain, Italy Portugal, Greece etc is really intriguing. No surprise really given the history of those countries all the way back to the 60s in producing some great garage, psych and power pop bands, but intriguing nonetheless when you are the subject of it.

THE ACTIVE LISTENER : You're a band that critics (myself included) love to compare to other bands, whether influences or contemporaries. What would your dream comparison be?

CRAIG BRIGHT : Blimey. That would take a whole night of drinking and arguing to land at anything approaching a consensus in the band. Ben and Jonny as the songwriters would naturally have a large say, as well as varying opinions, but I guess the one band that probably best encapsulates our current sound and foundation right now would be The Byrds. Musically they covered so much ground in such a short space of time in the mid to late sixties, and when you look back now it's almost bewildering. Obviously to be compared to a band, you would need to sound like them, but we aren't consciously trying to sound like any one band, The Byrds or otherwise, or even one style or era. We play folk pop songs first and foremost. Sometimes with a country feel. Sometimes with a psychy feel. Sometimes with an American feel, sometimes very English. Sometimes all of those. I guess the one thing we have done to date which best illustrates the more diverse outlook of the band is the Time and Space Machine remix of Magic Carpet Ride, which transformed what we do onto a different level, including the dance floor. As Richard Norris calls it, Cosmodelica.

THE ACTIVE LISTENER : How's the CD selling, and is a vinyl pressing on the horizon?

CRAIG BRIGHT : The CD is selling well. It has only officially been released for less than a month now, but we did sell a fair amount of copies late last year as an appetiser. I'd be lying if I said we were on the verge of taking the album charts by storm (do they even exist any more?), but we are happy with how it is fairing. That said, we could do with shifting a few more yet to replenish the coffers to make album number two a realistic short term aim.
Regarding a vinyl release; we sure hope so, though without wishing to reduce the magic of music to numbers, we would have to be confident that enough people would want to buy it to make it worth our while. So far we have had plenty such indications so it may well be feasible. Personally, I buy all new albums on vinyl if they are available, and I know there are many others out there who are the same. I also think that it would be such a shame to never hear the album given its sounds and vibe, on vinyl, so we'll be dong all that we can to make it happen.

THE ACTIVE LISTENER : Any plans to tour "On Sunset Lake"?

CRAIG BRIGHT : Tour is a strong word! But yes, we will certainly be playing as many gigs as our daily lives allow. Largely in the UK I guess, but we are trying to look at the possibility of some European dates later in the year too.

THE ACTIVE LISTENER : How the heck did you get Richard Norris's attention for that excellent "Magic Carpet Ride" remix (B-Side to their Magic carpet Ride 12" )?

CRAIG BRIGHT : I had been a fan of what Richard had been doing for a long time, culminating in Beyond The Wizard's Sleeve with Erol Alkan and his own Time & Space Machine. As a regular attendee of Glastonbury, I had had the pleasure of witnessing the BTWS DJ sets in the early hours of the morning and what they were doing by spinning, mixing and re-editing classic old tunes by Love, The Beach Boys, The Beatles and other 60s psych/Nuggets stuff and more modern folkier tracks for the dance floor was really inspiring. They prove that you can look both backwards and forwards musically and that 'retro' music and more modern 'dance' music aren't mutually exclusive - they can live together quite happily, and thanks to Richard and other like minded sorts, they do, and where our music lends itself to incorporating that blend, we'll go for it. The re-edits they have done for the likes of Midlake and Findlay Brown are wonderful such examples.
Anyway, I met Richard at Glastonbury one year and subsequently emailed him to see what he thought of our new track (Magic Carpet Ride). He loved it thankfully and the remix just developed from there on in.

THE ACTIVE LISTENER : How deliberate a nod to the Byrds is "See You In The Morning?" And was it written with this in mind, or did this happen when the band got a hold of it and starting arranging it?

CRAIG BRIGHT : Notorious Byrd Brothers is a big touchstone for us because it blends folk and pop music with country and psychedelia, as well as what at the time was a boundary pushing outlook using the rapidly evolving technology and production techniques. So yes, a love of The Byrds and in particular that album undoubtedly contributed to how that song sounds.

THE ACTIVE LISTENER : While we're on the subject, how deliberate is your cosmic folk rock sound — is it a sound that you purposefully make happen, or is it just the way music comes out when you're in a room together?

CRAIG BRIGHT : Overall I think that we are just a product of our influences, as wide ranging as they are. There is always a degree of purpose and consciousness when it comes to navigating the sound of a band, but to say we pre-occupy ourselves with trying to sound a particular way would be misleading. Now that the template has been put down, I think we are at a stage where the sounds we make are largely organic and subconscious, but that's not to say we won't continue to evolve over the next few albums. I could as easily see us making a full on country album as I can a psychedelic opus. We'll go wherever the songs we write take us. Three of us have recently swapped instruments and formed another band (tentatively called The Flying Dimes) in which we are exploring the rawer grooves of 60s garage and psych sound. So watch this space!

THE ACTIVE LISTENER : Describe the personalities in the band without offending anyone.

CRAIG BRIGHT : I think it's fair to say that we are all pretty laid back and easy going, sometimes to a fault. The band is made of two brothers, two cousins and two musos, so I guess we are always likely to blend together quite well, albeit with the occasional difference to keep things fresh.

THE ACTIVE LISTENER : You sent me a folder of demos that were made before the recording of "On Sunset Lake" I believe. There's some pretty magical stuff on there — any plans to work on any of these songs for the next album, or are these relics from the past for you now?

CRAIG BRIGHT : I would say that they are now likely to be seen as music of its time and not revisited from a band perspective, unless we dry up altogether! I couldn't begin to tell you how many songs which Ben and Jonny have written which we are yet to tackle, so at the moment, I'm incline to to think that that revisiting them unlikely. Many, many other demos and versions, particularly Ben's home recordings, also exist, but we're saving them up for the inevitable Rhino box set in 20 years time!

THE ACTIVE LISTENER : I know you've only just released "On Sunset Lake", but you've alluded to a second album being in the pipeline. How far have you got with this and what can you tell us about it so far?

CRAIG BRIGHT : The second album is more or less recorded and waiting to be mixed and sequenced. We are hoping to have it ready sometime this year. So far, we think it sounds fantastic, having learned some lessons from recording 'On Sunset Lake', we believe it will be a step beyond in every way.

You can stream and buy their music here. 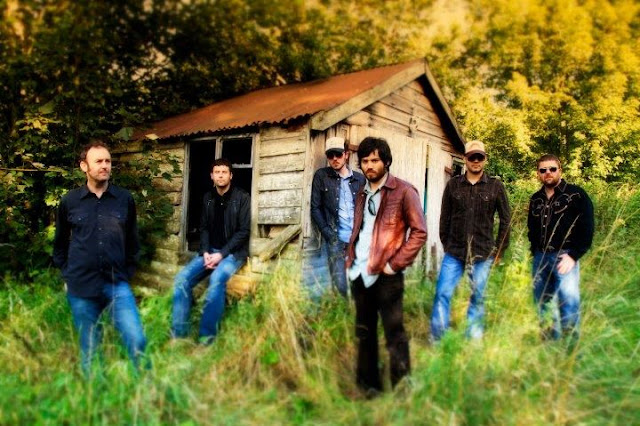