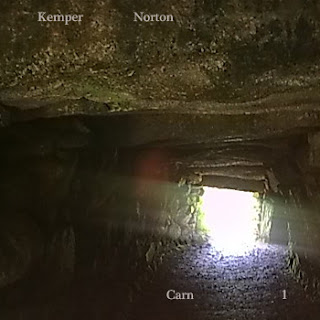 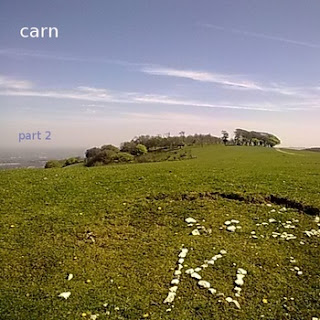 What looks like an ancient mineshaft adorns the front of  "Carn 1", but from the inside looking out. Kemper Norton seems intent on luring the listener into a mystical, altered state, outside of history and progress and linear analysis, to show the buried bones and glowing aura of a site, an event, a particular moment in time.

"Carn 1" and "Carn 2" are based around digital field recordings, gathered at key locations around Cornwall, then layered with loopy acoustic guitars, syrupy analog synths and pastoral chanting. It's like a soundtrack to a documentary about Pagan Britannia, with aerial footage of rolling green hills and stone circles in the mist. Notice that I say documentary, not the real thing. This is not your grandmother’s folk music. Instead, Kemper Norton is creating a new kind of audible ritual, a temporal rift to transport you from the bustle and grind of modern life.

Judging from the amount of styles and genres that I’ve already referenced in the first paragraph, you might assume that KN is another ADD-riddled dilettante, jackoff-of-all-trades, master of none. Thankfully, this is not so. There is a distinct aesthetic at work here, or a couple of them anyway. Much has already been said of Norton’s similarity to Coil, but that is probably the lazy man’s way of saying there are deadpan spoken samples, layered over abused sound collage and analog electronics. The main mood I detected on these two EPs was an Aphex Twin/Brian Eno lush warm ambiance, and at that he excels. He breaks the 4th wall of the immaculate electronic production with the sound of crashing waves and a breath of wind. The combination of the score-like synthwork with the real-world grit makes it seem as if you were watching this stone circle documentary on a crackled TV screen, next to a disused section of train track.

There seem to be more and more psychogeographic references in British electronica, with wonderful labels like Devon Folklore Tapes, or the recent time-travelogue of The Eccentronic Research Council’s "1612 Overture" (which I reviewed over here). You know things are getting good when you end up looking at GPS coordinates and witch-trial transcripts while attempting to write an album review. The British seem to appreciate their history, their roots. Maybe its how old their culture is, or just the beauty of the land itself? Kemper Norton is a psychogeographer, a traverser of both time and space. The effect of listening to "Carn 1" and "Carn 2" is like a heavy Salvia timewarp in one of these sacred places, experiencing 20 centuries simultaneously, past present future, snatches and snippets of found folk songs and guitar melodies going all granular then elongated. It seems as if Kemper Norton is able to capture and transmit some of the mojo of these Cornwall locations. Repeat listening can invoke some magick and wonder in your life, not to mention an interest in British history and geography!
I recommend putting either of these on, near dusk, in those purple twilight hours and watching the clouds fade to black.

"Carn 1" and "Carn 2" are available via Bandcamp, and are slated for a physical release in the recent future.