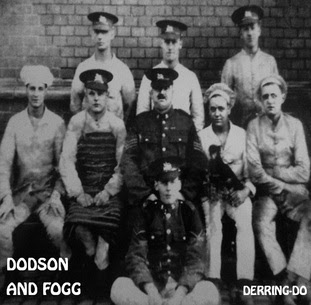 Dodson & Fogg's self titled debut was one of my favorite folk albums of last year, so I'm very (pleasantly) surprised to see a follow up so soon.
The debut (reviewed here) was a solid piece of singer songwriter / folk rock that recalled prime era Donovan, as well as any number of artists on the underground labels of the late sixties, early seventies - Harvest, Deram, Charisma, Island etc.
On "Derring Do" Dodson & Fogg's Chris Wade has set about expanding his palette, without sacrificing the period touches that made the debut so appealing.
So while this is still very much an acid folk album, there are forays into all sorts of unexpected places.
"Too Bright" could be an acoustic demo from T.Rex's "Electric Warrior" album except with backing vocals that sound like they belong on a Wings LP, while "Why Not Take Your Time" is a majestic piece of prog with mock Mellotron and an unusually gothic atmosphere which is much more successful than it should be with those ingredients. There are also harpsichord flourishes on "Flying High" and "Dreams of You & Me" that Ray Davies would be proud of, and some lovely trumpet parts that sound like the work of whomever arranged Scott Walker's "The Seventh Seal".
Having guests the caliber of Trees' Celia Humphris and Hawkwind's Nik Turner, who reprise their roles from the debut  doesn't do any harm either of course, along with Mellow Candle's Alison O'Donnell and The Floating World's Amanda Votta who supplies some devastatingly lovely flutework on "Dreams of You & Me".
But ultimately it's Chris Wade's impressive Donovan meets Nick Drake songcraft, not to mention his inventive use of the home studio that is the star of the show here.