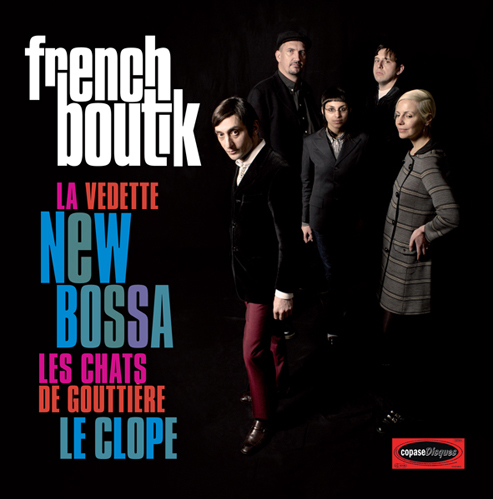 OK, so everyone else was reviewing this towards the end of last year, but I'm never one to rush a good thing, and this thing is particularly good.
The thing in question is the debut 7" 4 track E.P (remember them?) from French Boutik, a marvelous group of Parisian pop mods.
The carefully observed period sleeve is a pretty good indicator of what you'll find inside too - flawlessly cool vintage pop that owes as much to early Kinks and Marianne Faithful as it does to Jacques Dutronc.
Swinging London cool and French chic never sounded so good together!
"Les Chats de Gouttière" is a swinging piece of garage beat, that showcases Gabriela Giacoman's effortlessly breezy vocals with plenty of groovy organ and beatnik percussion.
"La Vedette" meanwhile proves that guitarist Serge can flex his vocal chords too, while the rhythm section take this in a more Kinksy / Blur style bouncy pop direction.
Elsewhere there's retro cool organ runs that would make Brian Auger grunt appreciatively, propulsive backing vocals that go"ba ba ba" in all the right places, slashing, trebly guitar chords and a general air of the sort of effortless cool that the non-french can only dream of wistfully.
Vintage mods should form an orderly queue here immediately, while those that need further convincing should check out the preview below: