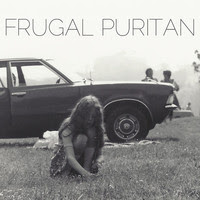 Interesting new developments here from Folk Police's Northwestern Series offshoot.
An archival release from a mysterious outfit known as Frugal Puritan....
Here's what the press release has to say :
"These recordings, along with a handful of photos and an extensive set of ‘explanatory’ notes, were passed to Folk Police Recordings by a musician loosely associated with the label. They were given to him by an obsessive collector of rare folk and psychedelia who has asked us to respect his anonymity. We can tell you nothing about Frugal Puritan – the album or the band. We can’t tell you when or where the songs were recorded, who wrote them or who plays on them. The sleeve notes tell a tale of utopian dreams turning into nightmares, of Jesus Freaks metamorphosising into Crowley-obsessed occultists, of innocents turning from the light and slipping into a darkness of drug-fuelled orgies and madness.
What we can tell you is that here we have ten songs that range from gently pastoral hippy folk to full-on fuzz-drenched acid rock, complete with lashings of devotional frenzy, handclaps and monster guitar solos. We have plaintive vocals awash with harmonies and subtle psychedelic touches. We have lyrical concerns that stray far from standard issue Christian folk: The Raising of the Dead borrows liberally from a particularly apocalyptical biblical passage; North Street Reign appears to be from the perspective of a murderer; Song for John David seems to quote approvingly from Aleister Crowley. The final track, Seven Stars, is a shimmering lo-fi psychedelic epic. This album will appeal to anyone who has explored the outer reaches of lost Christian acid folk: Caedmon, Perry Leopold, The Water into Wine Band or The Trees Community.
We can also hear echoes of artists as diverse as S.F. Sorrow-era Pretty Things, Spaceman Three and Roy Harper."

Frugal Puritan will be released as a limited edition CD on April 1st in a vinyl-style gatefold sleeve with 16-page booklet with design by Dom Cooper. It has been remastered by Pete Philipson (Starless and Bible Black/The Woodbine and Ivy Band). It'll also be available to download.