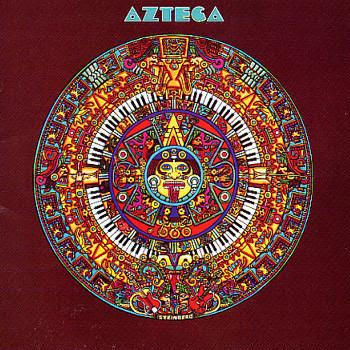 The psychedelic latin jazz fusion orchestra Azteca was formed by brothers Pete and Coke Escovedo shortly after their stint in Santana. Their aim was to put together a large band that would take the best elements of pop, rock, latin music, jazz, and R&B, mix them together into a heady, trippy soup, and create a new sound that was clearly rooted in tradition. Though theirs was a brief existence--they only released two albums.
Their self-titled debut, released in 1972, is a big record; heavy in sound, overflowing in groove, the album is initially a rather dense listen, but it's worth the effort, as it's pleasures soon start to reveal themselves. There's the trippy blues groove of "Empty Prophet," the Isaac Hayes-style "Peace Everyone" displays the Stax influence on the Escovedo brothers, while the Latin dance groove of "Ah! Ah!" and "Mamita Linda" will
put a smile on your face. Things get radically different, though, with "Love Not Then," when vocalist Wendy Haas takes the lead, and the band transforms into a 5th Dimension pop band. Less successful is "Ain't Got No Special Woman," where the duo sounds like a knockoff of their former band, Santana. Still, that one low spot doesn't overpower the greatness of the whole, as "Azteca" is a gem of a debut.

"Pyramid of the Moon", released in 1973, found the group reigning in the overwhelming sonic diversity of their debut, in favor of a somewhat straightforward Latin jazz sound.
"Someday We'll Get By" is rather standard Latin jazz-rock, and it really sets the tone for the rest of the album. While the grooves are smooth, something about the record feels missing; one longs for the up-and-down listening experience of the debut. Perhaps they were going for a more commercial sound--that would explain the slickness and the more pop-oriented material, such as "Find Love Today," while "Red Onions" borrows a little too heavily from "La Bamba," and feels like a knockoff of Ritchie Valens' signature hit. Yes, it's a traditional song, but even traditional songs and melodies can become cliched.
This more commercial direction didn't help sales, and the collective quietly dissolved shortly after the album's release. Guitarist Neal Schon would soon find commercial success with his band, Journey, and Pete Esovedo's daughter Sheila would, in a few years' time, become well known as percussionist and pop star Sheila E.
The idea of a musically diverse psychedelic Latin jazz fusion rock orchestra was a noble one, though perhaps "Azteca" was lightning bugs in a jar, a magical moment that couldn't be replicated.