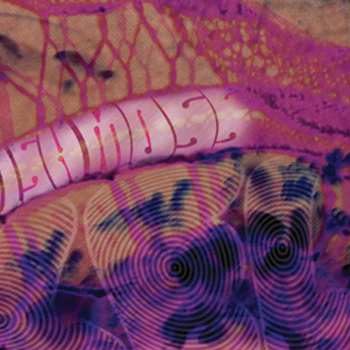 The Spanish Moss (based out of Santa Cruz, CA) have released a killer debut EP "Kelp".
Opener “Fuzz Puzzle”, which rather appropriately begins with a fuzzed guitar riff, is a winding and epic masterpiece, featuring echoey distorted vocals over a heavy rhythm section.
“Chemical Catherine” continues where that leaves off, again, with heavy fuzzed riffage that brings to mind Sun Dial’s masterpiece "Other Way Out" crossed with Sabbath’s Vol 4.
“Vril Loop” is a backward soundscape not unlike early Stone Roses that acts as a nice little interlude. If I may take the time to mention at this point that I heard this digitally, and can only begin to imagine how glorious this sounds on vinyl (which is available still according to their webpage).
The cover conjures up the exact mental image I was getting from these songs, focusing on the darker purplish end of the spectrum.
“Witch Rings” (which featured on one of the earliest Active Listener samplers) contains one of hardest rocking moments on the EP when the chorus switches to overdrive in both tempo and tone, which segues nicely into dreamy atmospherics.
Instrumental album closer “Catherine’s Last Trip” begins with a tamboura drone that sets the mood for the heavy raga rock feel of the piece, where the guitar feels like it was transposed from a sitar line.
Drop in, drone out indeed.