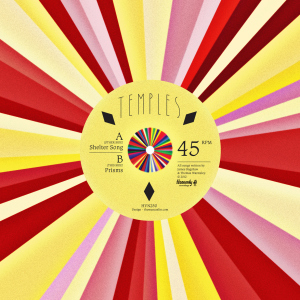 It's good to see some of the larger U.K independents taking a punt on some good old fashioned psychedelia lately. The mainstream acceptance of bands like Tame Impala has made it far more palatable for labels to dabble in psychedelia, and after releasing the rather fabulous debut LP from Liverpool's Stealing Sheep, Heavenly Records are back at it with the first 7" release of the even more sixties-fixated Temples.
These two tracks are very fine indeed and more than a little bit of a tease - a real throwback to the pre internet days when you weren't able to discover a band and download their entire discography within a matter of minutes.
"Shelter Song" welds a chiming 12 string riff to a stomping northern soul rhythm, and still finds room for an infectious psychedelic pop chorus. They do a very clever job of blending three disparate cult sounds to create something which should by all rights be a massive radio hit - accessibility without sacrificing artistic integrity is not something many folks manage, especially on a debut release.
B-Side "Prisms" is a slightly more subdued creature, but is none the worse for it. Introducing more of a baroque pop sound, this is a godsend for fans of the Ballroom and the likeminded Jacco Gardner.
Where's the album then? he says impatiently.

Check out both tracks here :