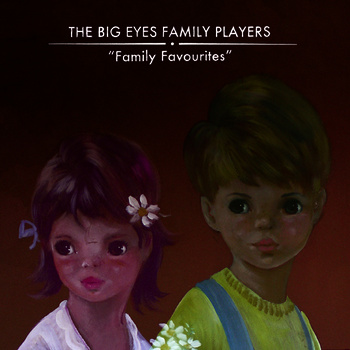 After being totally won over by the The Big Eyes Family Players' Folk Songs 2 album a few months back ( reviewed here ), I was curious to see how the band would acquit themselves without the many talented collaborators they were able to pull in for that record.
My first port of call was "Family Favorites", partly because it was their next most recent recording, and partly because it's a collection re-recordings of various pieces from their back catalogue - as close as you're likely to get to a best-of for a group of this nature.
And the nature of this group is markedly different to what you may expect, if you've only heard Folk Songs 2. There's very little folk to be found for a start, with the Players instead offering an almost unclassifiable and diverse chamber sound that pulls from many different influences to create something uniquely beautiful, and often surprising.
The delicate acoustic guitars and dissonant recorders for instance, on "Three Wheels" sound as if they're settling into improvised noodling, before the strings and drums kick in with something altogether different, the sort of grand gesture you'd be more likely to hear on a Dirty Three album (and indeed may well have as this is a cover of one of their tunes).
"Fast Loose and Lovely" on the other hand is aptly titled and rattles along at a rapid clip, like a gypsy jazz outfit auditioning for a Bond theme.
Best of all is "Amateur Dramatics" which has the propulsive snare work, and eliptical acoustic guitar patterns of a European Calexico.
Overall this is an adventurous, diverse and eloquent showcase from a group who seem to have a knack for mastering whatever obscure idiom they aim for with ease.

Buy the LP here from Norman Records, or buy digitally through the bandcamp widget below.