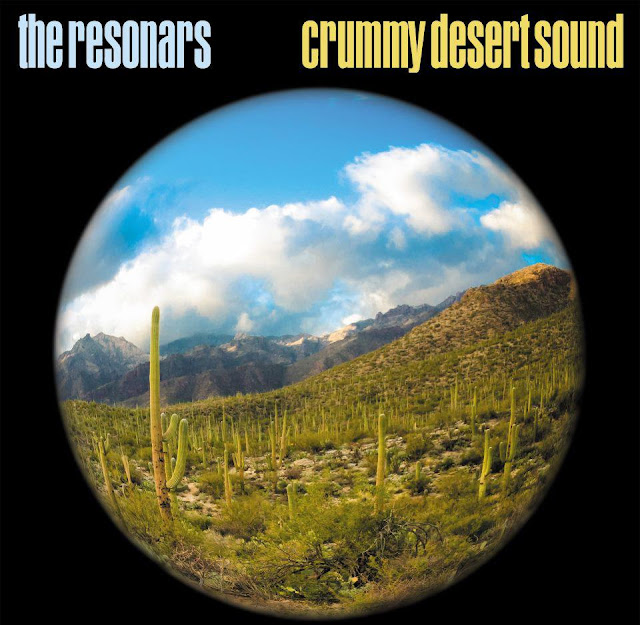 "Crummy Desert Sound" is another candy coated punch in the face from a band that can do no wrong and that somehow gets better with every release.
Imagine a world where Alan Clarke of the Hollies decided he'd rather be in the Who, but left the songwriting duties to Pete Townshend with perhaps a bit of help from Ray & Dave Davies every now and then.
Sounds like an idyllic setting for the discerning lover of British Invasion to while away their days, and if you were to knock on the door of the house next door in this picturesque world, chances are fairly good that it would be answered by Matt Rendon - the gentleman responsible for this maelstrom of melodic freakbeat.
Making a one man band arrangement sound like a tight knit beat combo is not a skill many have mastered, but fortunately Mr Rendon is a master of his domain and this gives any, and I mean any of the big name British Invasion groups of the sixties a run for their money.
Which is not to say that listening to a Resonars LP is an entirely nostalgic exercise as there's a relentlessness and an applied layer of grit that wouldn't be possible for a group that had never heard bands like the Clash before.
"Crummy Desert Sound" as you may have gathered then is an album full of top notch Bristish Invasion inspired guitar pop tunes, highlighted by windmilling guitar parts, stratospheric Keith Moonesque drumming, and picture perfect vocal harmonies, all delivered with the sort of snotty bravado that all the best rock n rollers aspire to, but few achieve.
Highlights are pretty much everywhere, but special attention should be drawn to the propulsive "Tomorrow Gears", the merseyside beat of "I Had a Dream", the guitar histrionics and killer chorus of "It's What They Do" and especially "A City Out of Reach" which glows with all the melodic sunshine of "Summerteeth" era Wilco.
Available very soon from the fine folks at Burger Records - visit them here.
Fancy a sneak preview of one of the tracks from this? Visit here : http://theactivelistener.bandcamp.com/album/the-active-listener-psychedelic-sampler-12-12