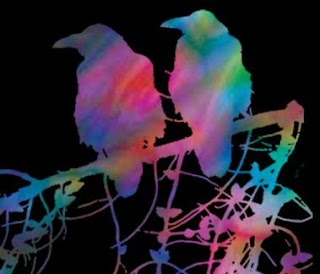 I've had the tables turned on me, and for once I'm being interviewed.
Our friend Flat Ed (whom you've heard on a couple of our samplers) has interviewed me for a psychedelic special which will feature on a radio show that he's putting together in January - as the interview will be broadcast in his native tongue (French), he's given me the OK to print a transcript here in English.
I've got to say, it's different being on this side of the interview process, but it was fun!
Thanks Ed!

FLAT ED : Nathan, I have seen impressive pictures of your large record collection, how many records do you think you own ? Apart from psychedelic or acid folk, any specific genre ? Are you a proper "record collector" or "music" collector ?

THE ACTIVE LISTENER : As record collectors go I'm at the more sane end of the spectrum. I currently own around 1000 LPs. I've had a lot more in the past but moving house 3 or 4 times in the last 5 years or so has convinced me that I don't need to own a copy of everything that I like. There is nothing more cumbersome to move than a record collection. So while there's new stuff coming into the collection frequently, I'm always selling bits and pieces that I don't play that much. records were made to be played so if I'm not going to respect them by listening to them every now and then, I'd rather they went to a home that was going to appreciate them.

FLAT ED : The Active Listener, your blog, focuses more on psychedelic music or acid folk, we can trace the roots of these types of music as far back as the mid 60's, with a peak around 1967/68, I'm still amazed that there's a lot of psychedelic music today. Is there a "Golden Age" or do you think the output has been pretty much consistent since the sixties ?

THE ACTIVE LISTENER : The late sixties was definitely THE golden age for psychedelia no question, but that doesn't mean that there haven't been a lot of interesting developments in the genre since then. There's definitely been era's that are stronger than others, in the early seventies a lot of psychedelic artists went prog rock, which a lot of people seem to think of as those artists selling out. This is ignoring the fact that a lot of these psychedelic artists started out as beat or rhythm and blues bands in the first place and that psychedelia wasn't their natural environment - no matter how well they handled it.

FLAT ED :  One of the earliest occurrences of psychedelic recordings dates as far back as 1962 with Alan Watts "This Is It", strictly speaking not just "music" but certainly an hallucinogenic experience on record. A few years later, and helped with the fact that LSD was still legal, most rock bands had a psychedelic phase, by the 1970's the first era was over. Do you think of psychedelia as nostalgia or the genre is still evolving ?

THE ACTIVE LISTENER : I'm a deeply nostalgic person so while some people may see nostalgia as a weakness, I find that music that reaches that place inside me makes a deeper connection. A number of critics seem to view psychedelia as a dead end genre that achieved everything that it's going to achieve in the sixties and is just being rehashed now. This is a very simplistic and one dimensional view of psychedelia - there are many bands out there today that continue to stretch the boundaries of what can be considered psychedelia. Having said that I tend to prefer albums that sound like they were recorded in the sixties, so I guess you could say that the main things that detractors use as evidence against modern psychedelia are the very things that I love most about it. Not every album needs to make a major statement and stretch boundaries. Music should be more about fun and attitude. I challenge anyone to listen to an album by the Resonars and not get swept up in the enthusiasm of it all.

FLAT ED : What are your top 5 Psychedelic albums of all times ?

THE ACTIVE LISTENER : Choosing your top albums is a tough process, that I liken a little to making someone choose which of their children they like best. Not that I let that stop me when I ask guests on the blog this very question.
I'm likely to give you a different answer to this question on any given day, but for today I'd have to say ( in no particular order ) Forever Changes By Love, SF Sorrow By The Pretty Things, Revolver By The Beatles, Tangerine Dream By Kaleidoscope and It's a Long Way Down by The Fallen angels. But then that's ignoring the likes of Piper at the Gates of Dawn and a whole bunch of others.

FLAT ED : If there was one psychedelic song that could remain, it would be?

THE ACTIVE LISTENER : For me it would have to be I'm Only Sleeping from The Beatles "Revolver".
I was lucky enough to grow up in a household that had a copy of the Beatles albums box set, that was played often. This song connected with me from a really early age and still has the same impact today. Even at the age of five I could tell that there was something not quite right with the backwards guitars and woozy atmosphere of this, but that didn't stop me playing it over and over again.

THE ACTIVE LISTENER : Again a very tough question. Definitely Love's Forever Changes again. The Beatles would have to get a look in but Abbey Road would probably sneak in over Revolver. Definitely some Dylan, but whether it would be Highway 61 Revisited, John Wesley Harding, Desire or Oh Mercy would depend on what day you asked me. David Crosby's If I Could Only Remember My Name is unbeatable. And Gene Clark and the Gosdin Brothers. Although ask me again tomorrow and you'll probably get a different five altogether!