Happy Halloween - Our Writer's Picks For the Season 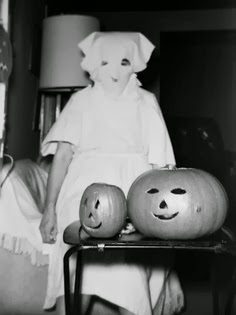 This year I pressured my writers into a particularly difficult task - to put together a playlist of just five of their favorite Halloween tunes each - I deliberately left this brief fairly open so that you'd see a number of different approaches and get to know our diverse little team a bit better.

Hope you enjoy what you hear.

As chief architect of the often creepy The Hare & The Moon, the mysterious Grey Malkin is better qualified than most to approach this task.

1. The Rattles - The Witch.
Chilling and completely bonkers.
2. Christopher Komeda -Rosemary's Baby
It's impossible to think of this movie without the vocal part of Komeda's soundtrack coming to mind. An unsettling classic.
3. Steeleye Span - Long Lankin.
He lives in the moss. He's out there. Lock your windows!
4. Sunn O))) and Nurse With Wound - Ash On The Trees.
A musical partnership forged in Hell, Stapleton and O' Malley create the perfect aural nightmare. Hiding under the bed is no escape.
5. Faun Fables - Eyes Of A Bird.
Both witchy and beautiful, Faun Fables are the ideal Samhain soundtrack. Light those lanterns!

"After coping with one too many student Halloween nights where the Ghostbusters theme tune gets played at least a dozen times, (it doesn’t matter how drunk I am, I know what you’re doing), I’ve come to the conclusion that nothing beats some delicious house-party Halloween debauchery. Budget decorations, homemade cocktails, but best of all - control over the music. Making playlists is fun at the best of times, but there’s something special about doing a Halloween one. At the risk of babbling on about the art of a good playlist, I’ll just say two things; one – it’s all about the atmosphere, and two – keeping this down to five tracks is one of the hardest things I’ve had to do. Probably. Here’s my pick of what I would include. Stick these on while black and white episodes of the Twilight Zone play in the background and your make up begins to melt down your face.
Happy Halloween!"

1. The Attack – Strange House
‘It was strange...in his house...’ Some killer 60’s UK psych to open it up. That bass.
2. Night Beats - A Night with Nefertiti
Yes please. Some dark and dirty US garage to get things grooving.
3. White Noise -Love Without Sound
Stumble to the punch bowl (was it always that colour?) and fill up a cup as lines about labyrinth eyes and perfumed electric gardens echo mysteriously out. The sound effects are already there (and you’re never too old for the convenience/surprise of a punch bowl).
4. Death in Vegas – Dirge
Got to have some Death in Vegas on there. This one suits the evolving concept of my playlist pretty nicely – re-animated beings allowed to love again for one night...
5. Spider and the Flies – Autochrome
I like my Halloween nights to be doused in B-movie vibes. Some Spider and the Flies (Tom Cowan and Rhys Webb from The Horrors) will do the trick. It’s all go from here...

"Halloween is a lot of things to me. It’s a day to dress up, invert the standard, be something you both are and aren’t. It’s a time when things aren’t as they seem, when streetlights look more sinister, when the wind may carry whispers, when that thing you thought you saw out the corner of your eye really was there. It’s eerie and autumnal in that way that makes it feel like it’s a time out of time, something suspended between. That’s the essence of what it is; the carnivalesque, the liminal. It’s also, like the Mexican Day of the Dead to which it bears a resemblance, a day to remember those you’ve lost. I usually favor songs that remind me of these things—the absurd, the spooky, the departed. I’ve tried to include something of each here in my list."

1. The Jim Carroll Band – People Who Died
As the title says, this is a song in which Jim recounts people he’s known who have died—“They were all my friends, and they died”—reminding you of everyone you’ve lost but being up-tempo enough that you don’t feel completely oppressed by the though.
2. Stone Breath – Flowers on Your Grave
I know of no better song about a ghostly friend than this, and no one better to sing such a song than Timothy. It, and Stone Breath encapsulate the eeriness of the day, the inbetween-ness, like no one else could.
3. Bauhaus – Dark Entries
It isn’t Halloween without a little Bauhaus, who perfectly evoke that slightly sinister feeling of walking home from your Halloween party at some ungodly hour, feeling like you’re alone, but not alone.
4. Neko Case – Furnace Room Lullaby
This particular song reminds me of Edgar Allen Poe’s “The Tell-Tale Heart” – of being haunted by a strange and terrible thing, being consumed by an obsession, becoming something you didn’t think you were or could be.
5. Mark Kozelek – Green Hell
Mark’s cover of the Misfits song makes it sound both more absurd and more depressing than the original and so it unsettles and disturbs in a way—he means it, he’ll shake apart, but this hell is like any other, just kinda green.

As well as writing for us Jason has his own blog, "Forestpunk" which is full of this sort of stuff. Investigate.

1. Zombie Zombie - Halloween Theme - ft. Alan Howarth.
Famed Carpentcore bring John Carpenter's eerie minimalist to rockist life, in this case performing with Carpenter's musical companion Alan Howarth. Get it started.
2. The Gate - (dialog) - The Old Gods!
In the tradition of classic horror mixtapes, here's a bit of movie dialog from 1987's "The Gate". Remember, The Old Gods are out there, in the darkness, just waiting for their chance to take back creation. Great movie.
3. Children Of The Stones Theme
I thought your party could use a bit of dark ambiance, so picked out the theme from hauntological staple "Children Of The Stones", full of atonal choirs, whispering winds. Evokes the feeling of an ancient stone circle on the moors.
4. Mater Suspiria Vision feat. Scout Klas -The Labyrinths of Venice
Can't have TOO much dark ambiance, so here's some excellent witch house from the head of Phantasma Disques. The video is taken from "Don't Look Now", a classic psychotropic British ghost story that is worth seeking out. Nice and grainy. Nice and bloody.
5. Sergei Rachmaninov - Isle of the Dead, Op. 29
Found this specially for this playlist, it's become a staple in my daily listening habits. Its a symphonic poem, based upon the painting by Arnold Böcklin, it's surreal and impressionistic, using orchestral themes to give the feeling of the spray of water, the smell of charcoal, and the whispers of dread. We all could use more classical music in our lives. It inspires us, and reminds us how it could be done.

It wouldn't be fair for me to dodge the bullet myself after putting the rest of my writer's to the task so here's my own contribution to finish things off.

1. Daniela Casa - Occultismo
The most ominous track from perhaps the creepiest library LP of all time, Daniela Casa's "Societa Malata"
2. Mr Fox - Mendle
At the creepiest end of the original U.K folk-rock spectrum lies this drone laden anthem from the Peggs.
3. Pram - The Owl Service
Inspired by Alan Garner's classic young adult's novel, Pram launch into a surprisingly funky early hauntological precursor which has proven hugely influential.
4. H.P Lovecraft - At The Mountains of Madness
One of two adaptations of Lovecraft short stories by this excellent U.S psychedelic folk-rock outfit - a personal favorite.
5. John Carpenter - The Fog
No Halloween is complete without Mr Carpenter's input, and while his score for "Halloween" remains the pinnacle of modern horror cinema, his slightly more understated work on "The Fog"is deserving of more attention also.