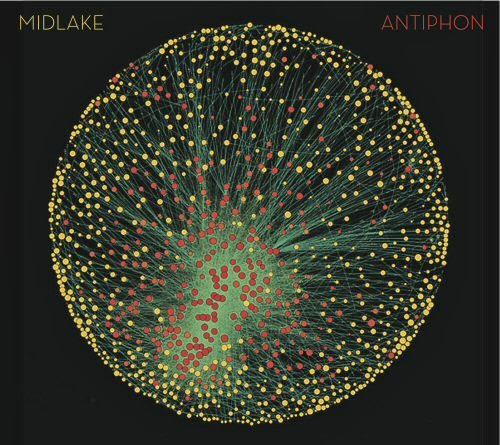 When it was announced earlier on in the year that frontman Tim Smith had left Midlake well into the recording of their fourth album, things looked decidedly glum for fans. Over the last few years the music press had fixated on Smith's dominance of the band to the point that the idea of a Midlake album without him seemed impossible - imagine a Wilco album without Jeff Tweedy or a My Morning Jacket album without Jim James. Pretty hard to do, isn't it?
However it's not unheard of for bands to lose their driving wheel, regroup and hit back with a winner ala Pink Floyd, and "Antiphon" is no "Saucerful of Secrets" with a departing member's presence uncomfortably lingering while the other band members struggle to engage the gears. All traces of Smith are gone, even though this meant scrapping two years worth of recordings and starting over. And guitarist Eric Pulido who has stepped into the lead vocal role sounds like he's meant to be there.
One thing that plays into the remaining members of Midlake's collective hand is that they've already built a reputation for not making the same album (or even same type of album) twice.
This lack of expectation of a certain sound meant that for better or worse Midlake were pretty much given the freedom to do what they wanted, and left to their own devices they've come up with an album that sounds appropriately Midlake-ish without sounding like they're trying to retain fans of Smith at the expense of their own growth.
Admittedly, "Antiphon" doesn't have the singular and quite separate musical identities that it's two predecessors had, but it does sound exactly like it should. You wouldn't hear this playing in isolation and not immediately know who was playing - no mean task for a band with such a mercurial approach to music making, and a sure sign that the remaining band members were responsible for far more of the band's distinctiveness during Smith's reign than we may have previously thought.
Pulido's voice is an ideal replacement for Smith's, and the strong harmonies that we've come to expect from the band remain intact, but musically this is a much heavier prospect than previous outings.
A dense psychedelic fog of a record with huge, elaborate drums, and a thick production sound that reminds me favorably of an Americanized take on the first few Doves LPs.
"Provider" is the immediate standout with it's instantly hummable, rhythmic chorus, layers of mellotron-like keyboards and heavily processed psych guitars creating an anthem that largely sums up the sound of the album at it's best. Those vintage keyboard tones that you've come to love make numerous and varied appearances, the rhythm section are allowed greater prominence than ever before giving this a drive that previous Midlake albums lacked, and the guitar breaks are often subject to freakbeat levels of tremelo abuse. But the most impressive thing about "Antiphon" is how strong the songs are. There's not a weak track to be found here. It's not often that you come across an album like this with both substance and style, and given the circumstances surrounding it's creation this is much, much more than we had any right to expect.
Tim Smith's going to have to work very hard on his solo project to come up with something that will top this, and I for one can't wait to see what he comes up with.

"Antiphon" is available on CD here, and on vinyl here.