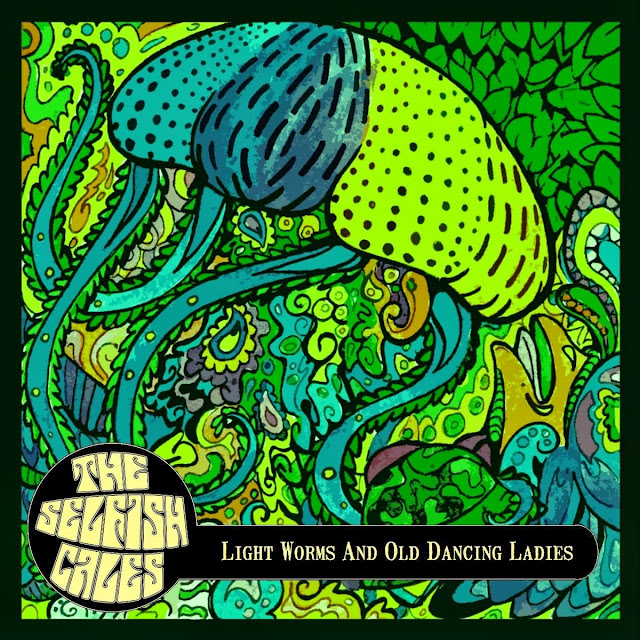 The Selfish Cales (not actually that selfish - this album is a free Bandcamp download) are a prolific Italian cottage industry psychedelic band who wear their influences on their sleeve. Anyone uncertain of where their heart lies is directed to "Dandelion Seeds", a covers E.P that they released last year which may not actually contain the July track that provided it's title but does feature material originally performed by The Idle Race, The Zombies, Love and Tomorrow.
And their own material (which "Light Worms & Old Dancing Ladies" is full of) acknowledges these influences openly without getting stuck in the mire of out and out revivalism.
Brothers Gabriel & Andy Cale navigate these treacherous waters skillfully with a sound that finds a safe middle ground somewhere between the more soulful end of the brit-pop spectrum and the rich neo-psychedelia of the sadly missed Rainbow Quartz label, with a good balance between the two.
"Keep On" is probably the best of the former - a storming Oasis style anthem with extensive organ leaning and climactic guitar shredding but the following track, "State of Eternity" trumps it with it's bright neon neo-psychedelic sound - all Ringo drum fills, Small Faces organ and dominant sitar lines.
And they do get around to covering July on this outing, bypassing the more obvious "Dandelion Seeds" in favour of "My Clown" which is given a big organ filled arrangement that has a hint of the Chills about it during the chorus, and fits in seamlessly with their own material.