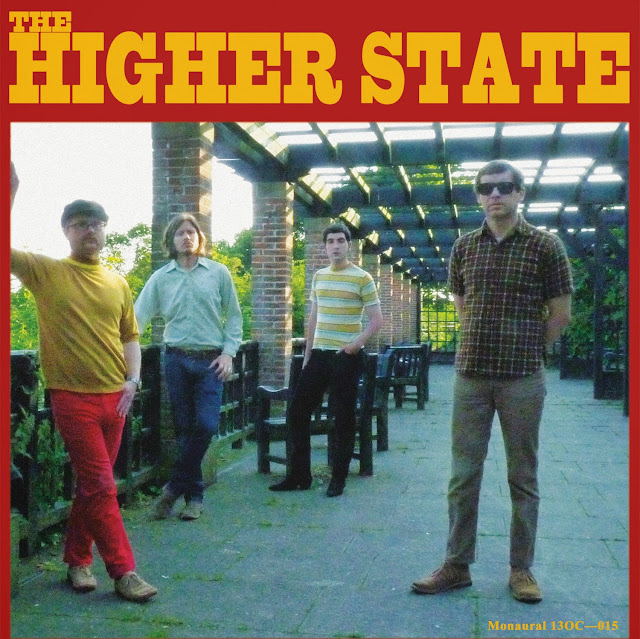 There are a number of reasons that established bands release self titled albums well into their career - to acknowledge a fresh start, a creative rebirth, a change of direction or simply as a statement of purpose - to establish that this is the definitive article as far as they're concerned.
The Higher State's new album combines a number of these factors. It certainly doesn't aim to undermine what they've done before ( and it shouldn't - their back catalogue is stupendous), but it does foreshadow a fresh chapter in their story (their first album recorded with new bass player Paul Messis, who you'll no doubt be aware of from his own two killer solo LPs, as well as his Market Square label), and a new focus (specifically on L.A style folk rock circa 1965-66, rather than the San Francisco sound that previous albums also embraced). In short, if you're a fan of the Byrds first two albums (particularly "Turn, Turn, Turn") or to a lesser extent Love's debut, then you're going to love this.
Recorded as usual at Sandgate Sound Studios in Kent (that's right - these guys are English believe it or not), the Higher State here continue to obey the laws of analogue with such authenticity that your mind will boggle at the fact that this is a product of the here and now (physically, if not spiritually), with lush multi-part harmonies and huge amounts of vintage jangle.
And the songs may well be their best yet, whether it be the biting folk-punk of "Potentially (Everyone is Your Enemy)" with it's lacerating fuzz guitar, or even better, "You've Drifted Far" an absolutely stunning track full of keening melancholy that sounds like a missing page from the Gene Clark songbook that has finally found it's way home.
You could spend hundreds of dollars on E-Bay on second tier psychedelic folk-rock obscurities from 1965-66, or you can face facts and admit that most of them don't hold a candle to this gem.
Hugely recommended.

If you are interested in pre-ordering the new Higher State album, please send an e-mail message with "HIGHER STATE PRE-ORDER" in the subject header line and the form of payment you wish to use to pay for the album in your e-mail (paypal to 13oclockrecords@gmail.com, check, or money order). The sale price on the album is $13.00 plus shipping. See the shipping prices below for the correct shipping amount to your part of the world. Once your payment is received, you will be sent a confirmation e-mail stating that your pre-order has been confirmed. Limit one copy per customer please! Currently it is looking like pre-orders on the new album should be ready to ship on November 19th barring any delays from getting the records from the pressing plant on time.
Shipping price for one album:
U.S. media mail  - $4.00
U.S. prirority mail - $9.50
Canada - $11.75
Mexico - $16.00
UK/Europe/Asia/anywhere else in the world - $17.75