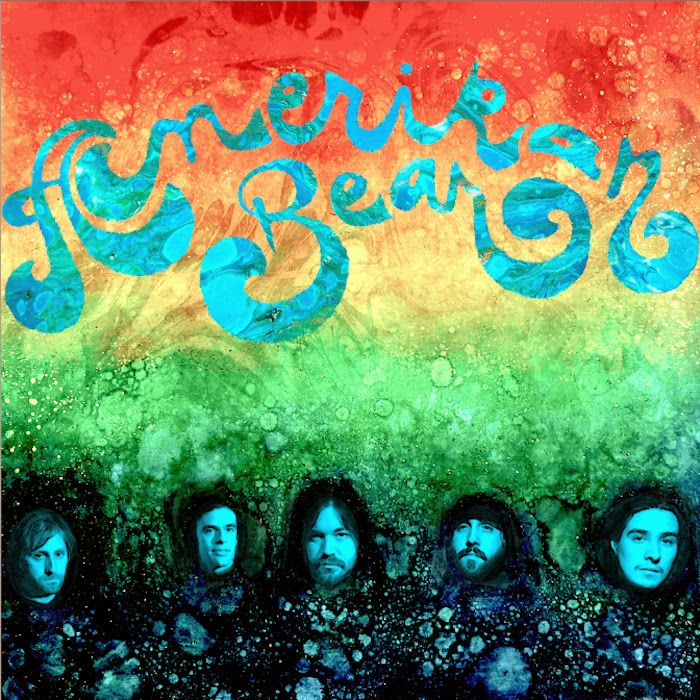 San Diego's Amerikan Bear are one of many bands found in my inbox on a daily basis, with little in the way of biographical information supplied, and as it turns out after a spot of Googling, a relatively small online footprint. This in itself, is not necessarily unusual. A number of the bands we feature are just starting out and making their first moves towards finding an audience. Occasionally though, one of these artists will grab me by the scruff of the neck and shake me around with such vigour that I truly can't believe they are not HUGE. Amerikan Bear, as you've probably gathered, are one of these groups. This self titled E.P is such an entertaining, confident affair that my mind boggled when I discovered that no one has reviewed this anywhere online yet. Really? There are a number of references to their live shows being scintillating affairs (which is easy to imagine while listening to this), but as for reviews of their studio works - nada (well, not that I could find anyway).

So let me just say that you are in for a treat with this. Amerikan Bear have a blistering vintage psychedelic rock sound, with a tough garage vibe, intricate, spidery guitar work with hints of vintage San Francisco psychedelia and a reverb heavy production sound that emits a scorching desert heat. Fans of bands like the Black Angels will find much to like here, but Amerikan Bear tone back the darkness by stripping the organs back into more of a supporting role, and focusing on tremolo-heavy guitar lines and an extremely commanding vocal performance which seems to reach back even further to the likes of Jerry Lee Lewis and Screamin' Jay Hawkins for its inspiration - check out "Summer Day" and "In My Dreams" - wow.

The rhythm section do a fabulous job too, keeping things rolling along nicely here, leaving the guitars and organ plenty of freedom to stretch out and investigate lysergic, hypnotic patterns without being hampered by the need to maintain momentum. The tribal toms in particular impress, giving a bottom end oomph which provides an excellent balancing point.

There's a real vintage feeling to these recordings - I'm assuming that they were captured in a fully analogue environment - but there's also a grittiness that was rarely captured on tape during the days that these songs emulate.

Pretty much essential, this can be had in a digital format directly from the band's Bandcamp page below, with a vinyl version to follow in a few months. I'm not 100% sure, but it appears that Amerikan Bear are currently not tied to a label. Whoever signs these guys is on to a very good thing indeed. Any takers?