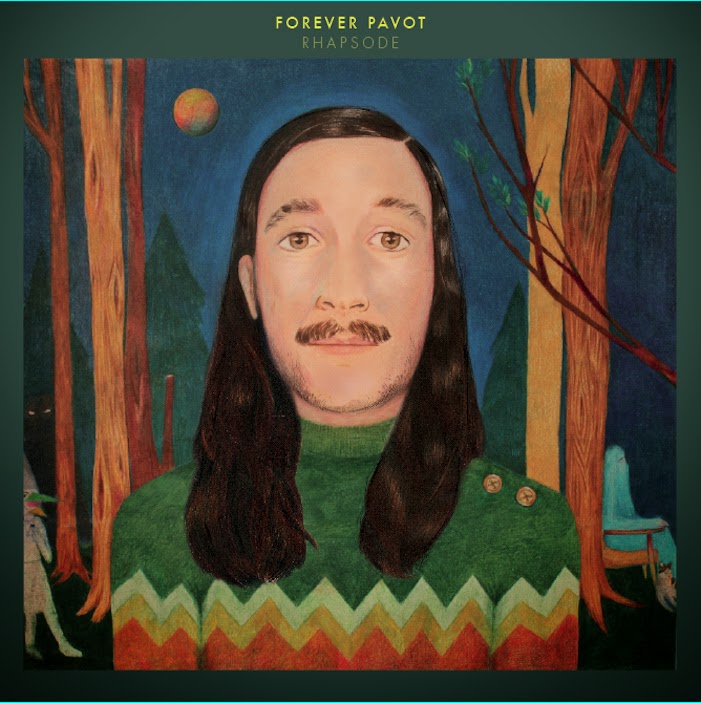 Emile Sornin's one man band Forever Pavot has released several singles over the last year which have been intriguing enough to build up some sort of anticipation that his debut full length will be something pretty special. And "Rhapsode", I am glad to say, doesn't disappoint now that it's here.

Building on the psych-pop-meets-vintage-euro-cinema vibes of those two singles (which you can find here), "Rhapsode" is split fairly evenly between the cinematic and the hooky pop side, with lovely attention to detail in its baroque pop arrangements that make the disparate strands intertwine effortlessly. Comparisons to Jean Claude Vanier aren't unwarranted, but Emile has a more pronounced sense of pop hooksmithery that puts him into the same sort of league as Tara King TH. and Halasan Bazaar; able to cast the most direct and engaging hooks within exotic and uber hip arrangements that swing with that effortless French cool, and the occasional Italian crime caper vibe.

And while fans of recent baroque pop revivalists like Jacco Gardner and Violet Swells will settle in very comfortably here, Sornin has a tougher edge - witness the frantic fuzz and farfisa on numbers like "La Rabla" and "Les Cigognes Nenuphars - to help offset the occasional fluffy moment, and give "Rhapsode" a little more depth than your average baroque pop album. The frequent instrumental interludes tie things together nicely too, creating a continuity that helps the album flow as a uniform piece, rather than feeling like a selection of bits and pieces tacked together. With the diversity on display here, that is an admirable feat.

The press release for "Rhapsode" includes the following statement from Sornin: "I feel a bit like Stereolab or Broadcast, artists who draw from the past to make something new (...) Ten years ago or so, I was doing hardcore punk, then I did chiptune, pop, compos garage / folk recorded on K7, and now things inspired from the 60's movie music ... the only guideline are my desires. Nobody will be able to get in my way if I want to make a reggae album in three years or an album of French songs. Because I'm the one who decides." I'm sure there will be plenty of people frustrated by the potential bandwagon-jumping sentiments of that statement. Particularly as there are bands everywhere who have spent years plugging away on albums that simply are not in the same league as "Rhapsode". But it seems that Sornin is one of those blessed with the keen observational skills and melodic sense to make whatever he puts his name to an unqualified success.

Here's hoping that "Rhapsode" earns the accolades that it deserves, and that the attention is enough to keep Sornin on this particular course for a little while longer at least. And if not, at least we've got a very fine album to revisit often here, before he turns his attention to that French language Peter Tosh covers album.

"Rhapsode" is available here on vinyl, and also through the link below on CD or digitally.