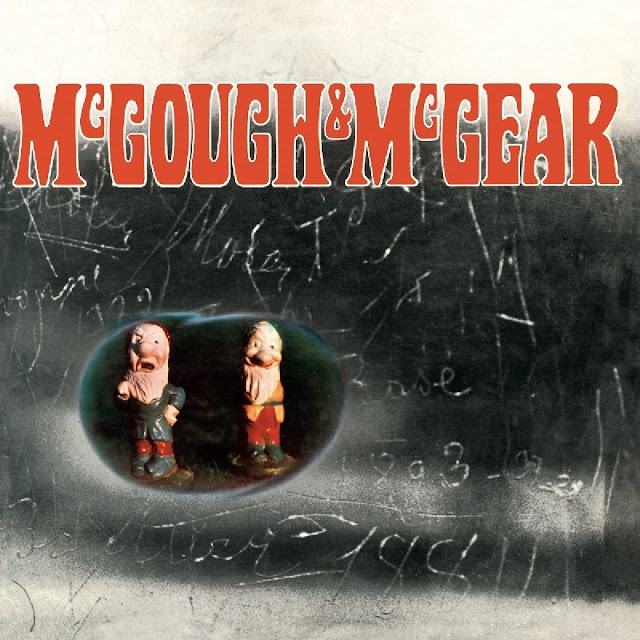 Here's an album that couldn't have been conceived at any other time; 1968's self titled McGough & McGear album, recorded at various 1967 sessions.

Following on from their work with George Martin as the Scaffold, Roger McGough and Mike (brother of Paul McCartney) McGear roped in all sorts of superstar guest help for this one: McCartney himself co-producing, and musical appearances from Jimi Hendrix, John Mayall, Graham Nash, Dave Mason and Gary Leeds. That alone would be enough to encourage investigation for a number of you, I'm sure, but it's the strength of the duo's material that really carries this album, with the bright lights and big names never in danger of outshining them.

They make an interesting, contrasting duo. McGough here displays his distinctly English poetic gifts with well a paced delivery that finds middle ground between Roy Harper's spoken monologues and the enjoyable absurdity of the Goons, the ridiculous and the poignant gracefully rubbing shoulders. McGear on the otherhand writes impeccable pop tunes, which coupled with Macca's production skills, make this a perfect period piece with just the right balance of full fledged tunes and accompanied poetry.

"So Much to Love" and "Ex-Art Student" are unmistakeably Beatlesque, with perfect harmonies and notable Hendrix input, while "Please Don't Run Too Fast" is a gentle, melodic lullaby which wouldn't have sounded out of place among the giants on Roy Harper's "Flat, Baroque and Berserk". Surprises lurk around every corner too, whether it be the jazzy maelstrom that "Basement Flats" descends into quite unexpectedly, or "Ex-Art Student"s diversion from Beatlesque popper to psychedelic sitar drone-fest.

It's a bit of a lost classic, embracing the most enjoyeble excesses of the sixties, and there's never been a better way to discover it than Esoteric Records' new reissue (unless you've got some serious coinage for a scarce original vinyl copy). Inside you'll find the full mono and stereo mixes on separate discs, remastered from the original Parlophone Records mastertapes, as well as extensive liner notes and a new interview with McGear.