Susan Matthews and Rainier Lericolais - Before I Was Invisible 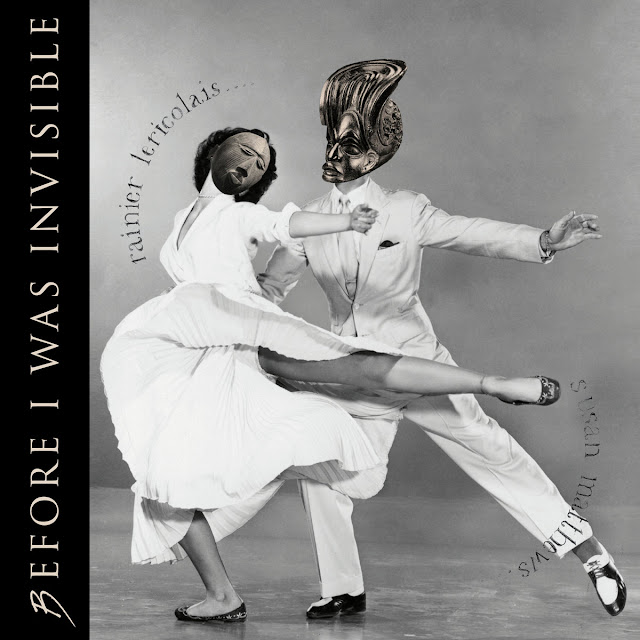 From the superb Wild Silence label (always a guarantee of something beautiful and refined, both musically and in terms of presentation) comes this latest release from Susan Matthews and Rainier Lericolais, their third album together. Hailing from Wales, Matthews is perhaps best known as the creator and director of the independent Siren Wire label and for her experimental yet hugely powerful solo work. She is also a voracious collaborator with other musicians counting, amongst others, Nick Grey, Fabrizio Modonese Palumbo, Yokna Patofa and now Lericolias within this circle. Rainier himself is known as an artist, performer, director and musician whose work hangs in the Centre Pompidou in Paris and who has previously teamed up with the esteemed likes of Simon Fisher Turner, Stephan Eicher and Sylvain Chauveau. For this recording the pair present three elongated pieces that sit together as a suite of sorts, an electronic requiem for ghosts.

The twenty five minute 'The Healer's Art' begins the album, as a crackle reminiscent of an old phonograph recording bleeds into a crystal pure drone, the sound of scraped and treated strings whistle by in the ether, a profound and melancholic sense of the sacred permeating throughout. The pitch bends eerily, there are ghost like presences in this music; quiet, determined wraiths that are in no hurry to reveal the reason for their return. Lovers of both Coil's 'Moon Music' and 'Musick To Play In The Dark' series as well as the windswept, bowed strings of composer Richard Skelton will find much to adore here. Solitary piano notes enter as an electric buzz and hum starts to become apparent. Although solemn and almost hymnal, this music is electric; a charge sparks, clicks and cracks across the piece. Long forgotten voices on an archaic vinyl recording play in the background, muffled but fighting for life as the piece purposefully unfolds and layers, the piano motifs become increasingly more central. Matthews's voice drifts into view, almost hushed as spooked brass and strings howl out into the void. Finally, warm organ notes blend with violin as Matthews recites what sounds like modern plainsong whilst vintage radio effects and voices seep into the present, spectral visitors from another era. This is an astonishing introduction, both haunted and haunting, a hugely atmospheric ambient work that stays with the listener long after the last note has rung out.

Next, 'Truth Past The Dare' reverberates into view, sounds and effects swirling forward and decomposing before us. Electronic glitches melt away and then return, floating into melancholic brass (which reminds this listener of John Cale's work on Nico's much underrated 'Camera Obscura' album) and Matthews ethereal, stretched vocal harmonies. Otherworldly and unique this is music for liminal spaces, for dusk or dawn; it is delicate and fragile and deserves rapt attention. Harmonium and chimes slowly and carefully enter to create a truly gorgeous mid section before brass and some very Coil-like electronics join for a heartbreaking and moving finale.

The final piece 'Your Ghost Moves With Me' begins with gossamer vocals that continuously layer upon each other, some playing backwards and drifting in and out of the speakers amidst a gentle buzz. The work quickly develops a choral and dreamlike quality; imagine the effect My Bloody Valentine achieve with guitars but with vocals instead. Percussion enters and leaves as looped strings and sounds appear quietly in the mix, as if hiding and biding their time. Then, the choir departs, the strings take centre stage and what sounds like a treated cello strides ominously into the mix amongst a whispering of spectral voices. This is a haunted house of a song; beautiful, melancholic, tortured and unsettling.

And then it is over and the listener can only wonder what it is he or she has just experienced and heard. One thing is certain, this is music that connects and affects the listener on a very deep level indeed. It is not ambient music in the sense of being background; when 'Before I Was Invisible' is playing you can focus on nothing else. Rainier states that with his work he wishes to grasp the elusive, a fleeting memory or a furtive gesture. I would suggest that with Susan Matthews and this album he has succeeded. This music captures something of a forgotten time, place or feeling; the ghost of a person who once was. Highly recommended.

Available now as a download or as a limited CD in a beautiful gatefold case, made with 100% recycled chipboard with artwork by Rainier Lericolais.