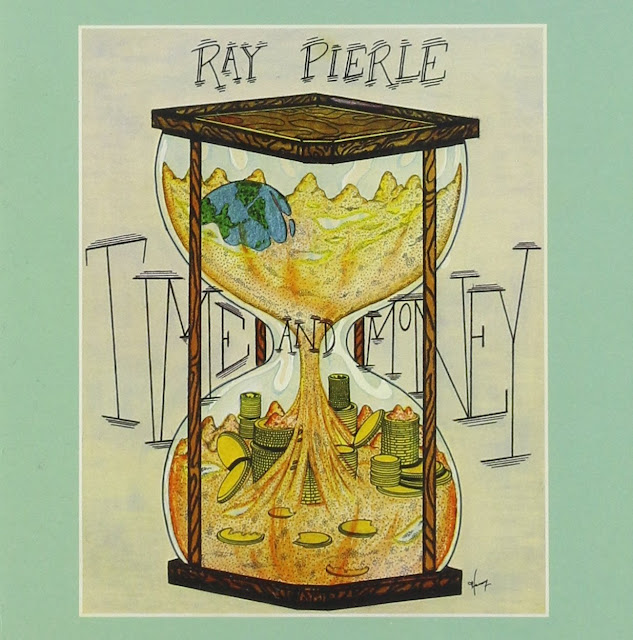 Ray "McKay" Pierle was the man behind one of my personal favorite albums, McKay's "Into You" a private press from 1978. Fans of McKay may know that Ray later had two solo albums, which were also privately pressed and kind of hard to find, featuring the next incarnation of the McKay group. Fortunately, Guerssen imprint Out-Sider is releasing a vinyl reissue of his first album, "Time and Money." It's quite a bit different than the lighter, folky, West Coast influenced McKay albums, going for a homebrewed, smoke-it-up party atmosphere with heavy riffs and fuzzed-out solos.

The album kicks off with "Roll Me Up," an upbeat rocker about, as Ray explains in the liners, life working during the week and recording and playing rock'n'roll in clubs on weekends. Definitely has that hazy, reefer cloud influence going in its favor, and Ray lays down some solid guitar solos. "Workingman's Blues" continues that theme with hard rocking bluesy melodicism. "Start Over" has a freewheeling, trippy atmosphere with some cool effects on Ray's vocals. "Pass It On" is a softer song, reminiscent of the earlier McKay material with it's CSN-styled harmonies. "And you only get more lonely when you're high..." go the lyrics, and there is a slight sense of despair overall. "Till The End of the Night" has some nice double-tracked acoustics and one of my favorite melodies on the album, and the leads are very much like Stephen Stills. "Wish I'd Always Feel This Way" with its Cream influenced strut and heavy wah-fuzz solos could qualify as the heaviest song on the LP. Another great song is "Madman Money" which is very dark and has more heavy riffs, and is about Ray's experiences getting paid for playing shows. "Livin' Them Lies" closes up the album, and has a fun, loose, and hard partying-atmosphere. Which might well sum up the vibe for the entire LP, most certainly heavier than the LP that came next, "Rhythm of the Highway."

As always the quality on this Out-Sider reissue is top notch, featuring comments on each track by Ray and full lyrics, and a photo of the group. The front cover artwork is also killer. If you are unfamiliar with Ray's music this is a great place to start.