Hexvessel - When We Are Death 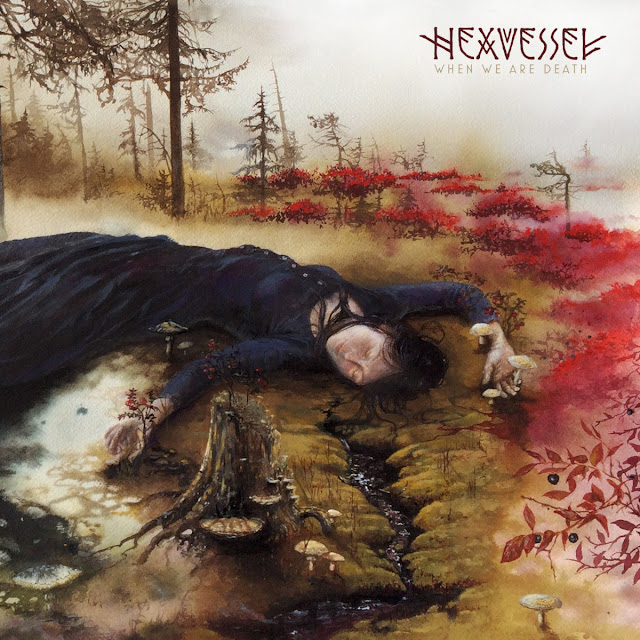 Finnish psych rock outfit, Hexvessel, have just released their third full-length, “When We Are Death,” – their first for Century Media Records – after a string of EPs in recent years. Predominantly, Hexvessel has been – and still is – identified as players within the psych folk scene, but, this time around, there’s a definitive and propulsive rock element taking forefront, channeling prog and classic rock, much more so than, for example, 2012’s “No Holier Temple.”

For this outing, the band held a successful Pledge Music campaign, which, in addition to inherent costs, raised awareness and donations for the Finnish Natural Heritage Foundation and the organization’s on-going forest preservation project. That should tell you a bit about the band, whose imagery and aesthetics often recall the ancient, mysterious and esoteric – not to mention black metal; their campaign rewards included amulets and elixirs – but it’s not, perhaps, as curated as other acts who present the same tropes. It’s clear to listeners – at least this one – Hexvessel cherishes atmosphere in their recordings, one that mirrors their surroundings, however you might interpret the word. It makes sense to keep those things safe: history, open spaces, culture, and natural environs; all of those things inform Hexvessel’s sound, which is sprawling, resonating, and – for lack of better words – earthly. Even as they explore new sounds – or bring new sounds to the forefront – at their core, this is still true. See the exceedingly atmospheric “Mirror Boy” or the shadowy and plaintive “Green Gold.”

The change of tone is immediately set with “Transparent Eyeball,” which, on top of its catchy, simple melody, a frenetic organ works alongside heartfelt vocals. “Earth Over Us” works similarly, though taking a searing surf-vibe as its launching point.

The lyrical content of “When We Are Death” holds the sometimes-disparate sounds here together well. Weaving together varying images of “stars spill[ing] on the forest floor” and “teeth of the mountain/body of the river,” singer Mat ‘Kvhost’ McNerney masterfully keeps listeners enthralled once again.

CD, Vinyl and Digital available here (UK/EU), and here (US).