A Year In The Country - Airwaves: Songs From The Sentinels 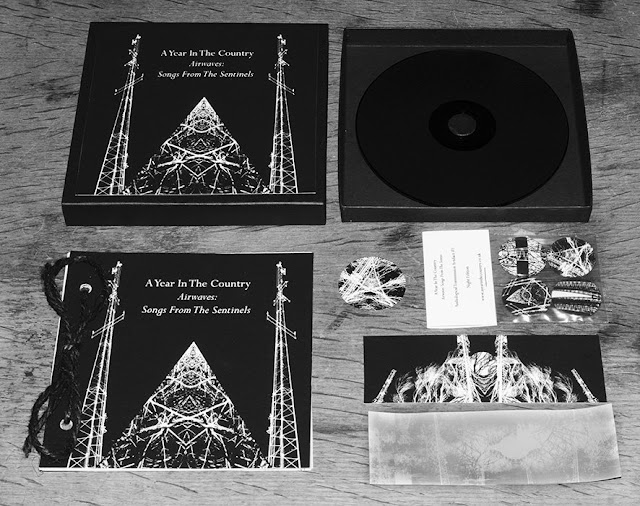 A Year In The Country is perhaps best known both for its superb and archival blog on all things wyrd and hauntological as well as its sister music imprint, which has released a variety of splendid releases by like minded souls such as Michael Tanner, United Bible Studies, She Rocola and last year's début album from A Year In The Country itself.

Concerned with Britain's more esoteric and uncanny hidden recent past, it came as a surprise when the blog site's frequent transmissions suddenly stopped last year. And now, just as mysteriously, they have recommenced, like a distant and crackly radio broadcast from another era. One of the first communiques was to inform about this, the second long player from A Year In The Country, of which is said; 'A study of the tales told/required to be told by the sentinels/senders that stand atop the land; a gathering of scattered signals plucked from the ether, cryptograms that wander amongst the airwaves, fading, tired and garbled messages which have journeyed from nearby or who knows where…the Airwaves set of audiological constructs are an exploration that begins with and via silent but ever chattering broadcast towers; their transmissions and sometimes secrets – the songs they weave from their own particular language and emanations'.

The album begins with 'The Chatter Amongst The Land', analogue synths creating a swirling and majestically icy symphony that recalls Bowie's 'Warszwa', an electronic clammer and muttering emanating like untold numbers of birds as old Albion awakens. It is an arresting beginning and curiously beautiful. This is followed by 'A Cracked Sky' which hovers into consciousness through a buzz of static, vintage keyboard whirrs and oscillating string sweeps to present an almost apocalyptic air. Aficionados of Tangerine Dream, Popol Vuh, The Caretaker, Eno and the Ghost Box label will find much to adore here. 'Night Mesh's urgent Morse Code electronic pulses and string stabs add a layer of frozen tension, a sense of something alien in the landscape watching us, waiting. The emphasis is on atmosphere and mood here, each piece carefully paced and constructed to conjure a certain sense or image for the listener. 'Flutter Once More' offers a more tranquil, Satie-esque ambience, a looped swell of strings playing just slightly in the distance as pulsating notes emerge from the air eerily crackling and echoing. As with Bowie's Berlin work and that of say, Popol Vuh or Eno, there is a distinct human connection and an ability to move and affect the listener, these are not clinical or lifeless pieces of electronica but are instead both hugely emotive and transportive. 'Fading From A Distance's glacial orchestration rises and falls and drifts in time to an inhuman heartbeat or a pulsating star (or indeed a lost radio signal) whilst 'Imparting Received's desolate piano and murmur of voices builds into a devastating piece of atmosphere that Paddy Kingsland (composer of 'The Changes') or the Radiophonic Workshop would be proud of. 'Song Of The Sentinels' brings a sense of dread and awe, the electrified hum and waves of strings accumulating to monolithic and disquieting effect. One can dream that the forthcoming TV adaptation of HG Wells 'War Of The Worlds' would have such a suitable soundtrack. 'Tales And Constructs' is a tapestry of chatter, effects and unease whilst the superbly titled 'They Have Departed Once More' shimmers and glistens like an electronic requiem or mass. 'To Be Sheltered's chiming piano motif adds a subtle warmth, banks of synth accentuating the rise and swell of the recurrent harmony before ending with the sound of a solitary radio transmission being sent out into the darkness. 'A Measuring's percussive jitteriness leads to the finale of 'For My Gentle Scattering', a heart-rending and epic symphony of strings, chilly drones and wintry beauty. And then there is silence, the transmission has ended; yet this album leaves behind a sense of wonder and mood that lasts for long afterwards.

A Year In The Country run their own small imprint to create artifacts of carefully constructed beauty and this album is no different. A triumph, it is hugely evocative, expansive and deserves to be widely heard and appreciated. They will continue to release such treasures regardless as this is a labour of love, however works as impressive as this should be recognised by as wide an audience as possible. Go out, sit, listen and watch for the sentinels.

You can hear a number of the album's key tracks here.

Available now, as with all A Year In The Country releases, in a variety of lovely, limited editions. A Dawn Edition includes a hand-finished white/black CDr in a textured recycled fold out sleeve with inserts and a badge whilst the Day Edition features a hand-finished white/black CDr in a ten page string bound booklet. The Dusk Edition includes a hand-finished all black CDr in a matt recycled sleeve with inserts (the back of one insert being hand signed and numbered) and the Night Edition box set contains an all black CDr, a twelve page string bound booklet, four badges, two stickers and a piece of unique artwork. Check out the various editions here.